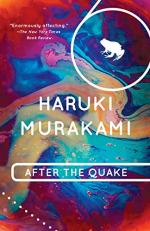 Haruki Murakami
This Study Guide consists of approximately 21 pages of chapter summaries, quotes, character analysis, themes, and more - everything you need to sharpen your knowledge of Super-Frog Saves Tokyo.

The following version of this story was used to create this study guide: Murakami. Haruki. “Super-Frog Saves Tokyo.” After the Quake. New York: Vintage International, 2003.

The story opens in February of 1995 in Tokyo, Japan. Mr. Katagiri is a 40-year-old collections officer who works for a large bank and lives alone. He comes home to his apartment one evening to find a very large frog there. The frog speaks and says that its name is Frog. Katagiri is quite startled and confused. Frog says that an earthquake will strike Tokyo in three days unless Katagiri helps him stop it. Frog says that there is an enormous worm called Worm under the ground. It spends most of its time sleeping, but when it is awake, it sometimes becomes angry and causes earthquakes. Worm was awoken by the earthquake in Kobe last month and will cause a huge, destructive earthquake in Tokyo if it is not stopped.

Frog says that he knows much about Katagiri. He knows that Katagiri, while quite ordinary, is commendable for his courage, efficiency, and dedication in his work. He is also remarkable in his sense of duty without expectation of a reward. Frog knows that, after Katagiri’s parents died, Katagiri put both of his siblings through college and helped to arrange marriages for them. His siblings never showed gratitude, but Katagiri di not mind. Frog says that in order to defeat Worm, he needs Katagiri to provide moral and emotional support during the battle. Katagiri agrees to help. Frog then says that he will prove his existence, and he leaves. The next morning, as work, Katagiri receives a phone call from a lawyer. The lawyer says that, because of intervention by Frog, the lawyer’s client will pay the large sum of money he owes to the bank where Katagiri works. Frog visits Katagiri in Katagiri’s office and says that the night before the earthquake, Frog and Katagiri will go underground to fight Worm.

On the appointed night, Katagiri goes to meet with Frog. However, on the way, he is attacked by a man with a gun. The man shoots Katagiri twice. Katagiri wakes up in the morning in a hospital, about one hour after the specific time that Frog said the earthquake would strike. Katagiri has no wounds, and the nurse says that Katagiri was found unconscious on the street. In the night, Frog visits Katagiri in the hospital room. Frog says that he and Katagiri managed to stop the earthquake. Frog says that he and Katagiri fought Worm in the realm of imagination, and although they did not kill Worm, they stopped the earthquake. Frog then dies of the wounds he sustained during the fight. Frog disappears, and the nurse arrives. Katagiri tells her that Frog saved Tokyo from an earthquake.