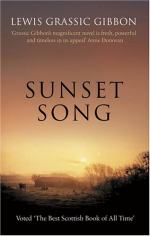 Sunset Song intertwines the life story of a young woman named Chris Guthrie with the history of a fictional Scottish community called Kinraddie during the early years of the twentieth century up to and including World War One and its immediate aftermath.

The Prelude creates a mythology and history for Kinraddie dating back to the twelfth century, weaving the history of the town into many major events in Scottish, British, and European history, including the battles between Scotsman William Wallace and the English, the English Reformation, and the French Revolution. The latter part of the Prelude describes Kinraddie as it existed in the winter of 1911 and introduced all of the characters living there at the time.

In Chapter 1 Jean Guthrie – the mother of the protagonist, Chris Guthrie – discovered she was pregnant with twins, despite already having four children. Because their family was now so large, her husband John took the decision to take over the lease at a farm called Blawearie and move the whole family to Kinraddie. Jean was deeply unhappy about having more children, but with no access to contraception and her husband’s refusal to respect her decisions about her body, she was left with no choice. Once in Kinraddie, Chris was sent to study at a nearby college where she felt herself torn between two identities: one which loved learning and the intellect, the other which loved agriculture and the land.

In Chapter 2, Jean murdered the baby twins and committed suicide after finding out that she was pregnant once again. Chris left college and devoted herself to working on the farm. Chris’s older brother Will ran away with a local girl whom he married and took to South America. John was so angry that he suffered a health crisis which left him paralyzed.

In Chapter 3, John died and Chris inherited all of his money and property. Rather than sell it, she decided to continue to run Blawearie on her own. Chris started a relationship with a local laborer called Ewan Tavendale. They got married and Chris later discovered that she was pregnant.

In Chapter 4, Chris gave birth to her baby whom she named Ewan. Britain declared war with Germany and many of the local men went to France to fight: some by choice, others against their wishes. Ewan signed up for the army. He returned home from training on leave and treated Chris very badly. Chris refused to speak to him when he left. Later, Chris received a telegram telling her that Ewan had been killed in the war.

In the Epilude, a new Reverend at the church in Kinraddie commissioned a monument to commemorate the men of Kinraddie who were killed in the war. The Reverend began a romantic relationship with Chris and Chris attended the unveiling of the monument with her son.