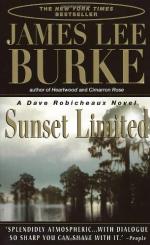 James Lee Burke
This Study Guide consists of approximately 38 pages of chapter summaries, quotes, character analysis, themes, and more - everything you need to sharpen your knowledge of Sunset Limited.

This detailed literature summary also contains Topics for Discussion and a Free Quiz on Sunset Limited by James Lee Burke.

Sunset Limited by James Lee Burke is a story of the South and the secrets it holds. Set in New Iberia Parish, Louisiana, it is the story of Dave Robicheaux, bait shop owner and investigator for the New Iberia Parish Sheriff's Department. Born and raised in New Iberia, Robicheaux's childhood was less than happy. He still carries the emotional scars of his mother's infidelities and the sight of Jack Flynn's body, nailed to the side of a barn. As an adult, Robicheaux is sometimes plagued by memories of his time in Vietnam during the war and nightmares in which he relives the murder of his first wife, Annie. These days, Robicheaux enjoys the simple life in New Iberia. He lives with his wife Bootsie and their adopted teenage daughter, Alafair. He can often be found in the bait shop with his helper, Batist, or on the lake fishing with Clete Purcel.

Robicheaux is not the only one who stayed in New Iberia after growing up there. His best friend and former Homicide partner, Clete Purcel is still around. In addition, Mout' Broussard, a fixture in New Iberia, and his son Willie who is known on the street as Cool Breeze, also have a history marked with murder and sadness. Cool Breeze's wife, Ida, supposedly committed suicide some years back and Cool Breeze has never been the same. Jack Flynn's children, Megan and Cisco, have recently returned to New Iberia. Since their father's murder was never solved, Megan and Cisco have chosen to stay away from New Iberia, feeling that the people of their hometown betrayed them. However, each of Flynn's children have since returned to New Iberia. One of them is contemplating revenge. New Iberia, like any other small town, has its share of colorful personalities, including Lila Terrebonne, the alcoholic daughter of the local power baron, Archer Terrebonne. Lila's drinking masks a horrible secret that even her father's money and prestige cannot blot out. Similarly, Archer Terrebonne's past holds an even more sinister truth and the wealthy descendant of slave-owners will stop at nothing to keep the secret from ever seeing the light of day.

Through an intricate series of twists and turns, Robicheaux finds himself investigating one murder after another. The intrigue begins with Cool Breeze Broussard's arrest for selling stolen VCRs from the Giacono crime family and Broussard's charge that he was mistreated by the guards at the New Iberia Prison. Soon, the FBI comes to New Iberia and threads linked to the Broussard case take on international significance. Robicheaux and his partner, Helen Soileau, travel throughout Louisiana as well as Colorado and Texas, unraveling the threads of the past and future, in hopes of laying to rest the specters of past wrongs and present demons.

More summaries and resources for teaching or studying Sunset Limited.