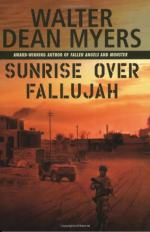 Walter Dean Myers
This Study Guide consists of approximately 28 pages of chapter summaries, quotes, character analysis, themes, and more - everything you need to sharpen your knowledge of Sunrise Over Fallujah.

This detailed literature summary also contains Quotes and a Free Quiz on Sunrise Over Fallujah by Walter Dean Myers.

Sunrise Over Fallujah is a young adult novel by Walter Dean Myers. The story follows the trials and experiences of eighteen year-old Harlem native Robin “Birdy” Perry through the opening months of the Iraq War in 2003.

Having seen 9/11 as a teenager, Birdy feels compelled to do something important for his country. So, he joins the U.S. Army. He becomes part of the Civil Affairs unit, dedicated to winning the hearts and minds of Iraqi civilians following combat operations. Birdy’s unit does everything from handing out supplies, to playing soccer with kids, to trying to soothe things over following accidental deaths. He and his teammates feel proud of what they are doing, and because they do their work so well, they are given the task of working with Special Operations forces to secure a cache of improvised explosive device detonators form southern Iraq. The unit is ambushed, during which time Birdy is wounded. Jonesy, his closest Army friend, is killed.

At the end of the novel, Birdy is transferred to Ramstein in Germany to be treated.

More summaries and resources for teaching or studying Sunrise Over Fallujah.