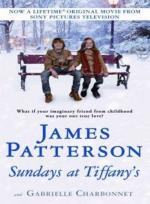 James Patterson
This Study Guide consists of approximately 22 pages of chapter summaries, quotes, character analysis, themes, and more - everything you need to sharpen your knowledge of Sundays at Tiffany's.

This detailed literature summary also contains Topics for Discussion on Sundays at Tiffany's by James Patterson.

"Sundays at Tiffany's" is the story of a romance between Jane and her imaginary friend, Michael. Beginning with a brief prologue introducing Michael running to Jane's deathbed, the story then starts in Part 1 (Once Upon a Time in New York). In this section, Jane, a little girl, and Michael have ice cream sundaes at the St. Regis Hotel in New York. Jane has a cold and distant mother, and Michael helps make her comfortable even though her father is absent. However, Jane's ninth birthday is coming up, and Michael views this event with dread. According to the rules of imaginary friends, he will have to leave her on her ninth birthday, whether they want to part or not. On her birthday, Jane's mother throws her a party that is really for her own friends; Jane's father drops by with his new girlfriend on their way to their vacation; and Jane does not receive the puppy she wanted. On top of everything, Michael tells her that he is leaving, and that he will never forget her, though according to the rules, she will forget him.

Twenty-three years later, however, Jane has not forgotten him. After she becomes a producer like her mother, Jane has turned the story of Michael into a successful play, which is being turned into a film. However, she is still insecure and under her mother's thumb. Moreover, her boyfriend Hugh is an actor who is pressuring Jane for the movie role of Michael, though she believes that he's all wrong for it. When she tells him this, they have a huge fight and break up, which her mother can't understand. Even when he proposes to her in exchange for the role, Jane refuses him, and he responds by leaving her stranded in Brooklyn.

Upset about her life, Jane goes back to the St. Regis, only to find Michael there with an acquaintance of his. "On break" from his duties as an imaginary friend, Michael has come back to New York and is living in the West Village until his next assignment. He is amazed to find that Jane recognizes him; as one of his children, she should have forgotten about him after he left. Nevertheless, the two rekindle their friendship, which slowly turns to romance.

However, after Jane has a particularly tense day and quits her job, Michael searches for her around the city and ends up in a cathedral. There, he realizes that he has come back to New York because Jane is going to die. With this in mind, he swears to live in the moment. When he finds her, he takes her on vacation to Nantucket. However, he is then struck with the thought that if he is not with her, perhaps she won't die. He leaves her due to this reason. However, she does not understand.

Back in New York, Michael feels called to the hospital and runs there, thinking Jane is dying. However, it is her mother, Vivienne, who is dying instead. Jane comes just in time to make peace with her mother, and at the funeral, Michael realizes that he was called to New York for Vivienne and not for Jane. As he admits this to Jane, though, he has a massive heart attack and must go to the hospital himself - he has turned into a human.

Surviving the heart attack, he and Jane are reunited, realizing his mortality. The novel ends with a brief scene at the St. Regis, where the couple have brought their son and daughter to enjoy ice cream sundaes.

More summaries and resources for teaching or studying Sundays at Tiffany's.