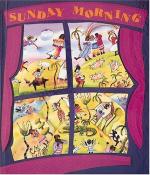 T. S. Eliot's The Waste Land (1925) offers another poetic examination of loss of faith in Christianity. The poem is considered to be one of the finest examples of poetic modernism.

Stevens's "The Idea of Order at Key West" (1936) presents a different view of reality through the consciousness of a woman.

The Sun Also Rises (1926), by Ernest Hemingway, one of the "lost generation" writers, focuses on a group of disillusioned Americans living in after World War I. Critics consider this novel to be the voice of its generation.

Discontented America: The United States in the 1920s (The American Moment) (1989), by David J. Goldberg, presents an overview of this fascinating decade and focuses specifically on how World War I affected American society.