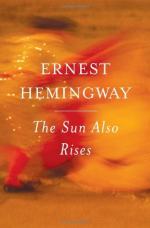 This detailed literature summary also contains Quotes and a Free Quiz on The Sun Also Rises by Ernest Hemingway.

The Sun Also Rises is Ernest Hemingway's classic novel about expatriates living in Paris during the years following World War I. It follows a group of friends who travel from Paris to the festival of San Fermin in Pamplona, Spain, where their interactions expose much about their true characters.

The story opens in Paris, where American journalist Jake Barnes is spending time with his friend Robert Cohn, an American Jewish writer who has published one book. During a night on the town, they run into Lady Brett Ashley, a twice-divorced English woman with whom Jake is in love. The relationship is doomed, however, because a war injury has left Jake impotent. Brett has made it clear that although she loves him, she has sexual needs that he cannot fulfill.

Brett's fiance, Englishman Mike Campbell, arrives in Paris, as does Jake's friend Bill Gorton, a writer from Chicago. Bill and Jake have planned a fishing trip, followed by a trip to the festival of San Fermin in Pamplona, Spain. Mike invites Brett and himself to go along. It is feared that this might be awkward because Robert Cohn is also going, and Jake learns that he has recently had an affair with Brett. However, in the end, it is agreed that everyone will go.

After a few days of fishing, Jake and Bill join the others in Pamplona, and they enjoy eating and drinking in the days leading up to the festiival. However, tensions begin to develop as a result of the affair, predominantly because Robert has clear feelings for Brett that she does not return and Mike finds him offensive.

As the festival progresses, Jake teaches Brett about bullfighting, and she continues to lean on him as a friend. Mike's drinking gets increasingly heavy. When a young bullfighter named Pedro Romero checks into their hotel, Brett is immediately drawn to him and begins sleeping with him, with Mike's knowledge and tacit permission. However, Robert becomes incensed when he learns of the affair, and he beats the matador badly before leaving Pamplona to return to Paris. As the festival ends, Brett leaves with Romero and the others split up, with Jake going to San Sebastian for a few days of rest. On the second day, he receives a telegram from Brett, saying she is in trouble and asking him to meet her in Madrid. He arrives to find that she has sent the bullfighter away and plans to return to Mike. When she says they could have had a good time together, Jake replies, "Isn't it pretty to think so?"