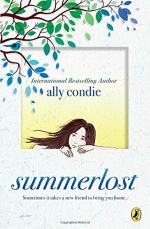 Condie, Ally
This Study Guide consists of approximately 57 pages of chapter summaries, quotes, character analysis, themes, and more - everything you need to sharpen your knowledge of Summerlost.

This detailed literature summary also contains Quotes and a Free Quiz on Summerlost by Condie, Ally .

Cedar Lee is spending the summer in Iron Creek with her brother Miles and their mother. Cedar's father and her other brother named Ben were killed in a car wreck a short time earlier, and Cedar's family is learning to find their way in light of this traumatic event. The three surviving members of the family are uncertain about how to deal with their grief, and each begins the healing process in his or her own way. For Cedar, this involves immersing herself in the life of Lisette Chamberlain, a dead movie star who had lived in Iron Creek before she became famous. Cedar meets Leo Bishop, a boy who knows almost every detail of Lisette's life and death.

Leo has a job at Summerlost, a summer festival that includes plays. Leo sells programs, and Cedar joins the team. Together, they launch a guided tour that shows places important to Lisette. They do not tell their parents or the officials at Summerlost about their guided tours. Cedar and Leo quickly begin earning extra money. Leo claims he has been to England, but he is actually saving all the money he earns toward a trip there. After they have been giving tours only a short time, someone turns them in to the Summerlost officials. Their parents are horrified that they have been meeting with strangers to give the tour and forbid them from giving any more tours. Before Leo is able to save the money for his trip to England, he and Cedar are fired from their jobs at Summerlost .

Meanwhile, Cedar and Miles have bonded over the summer at Iron Creek. They have been watching a ridiculous soap opera that could be morbid if it were not utterly cheesy. They are enmeshed in the story line to the point that they lie to their mother about what they are doing every day. When their mother finds out, she has their television service disconnected. But, that does not stop Cedar and Miles. They go to Leo's house to continue watching.

Over the course of the summer, Cedar finds things on her windowsill that remind her of her brother Ben. Ben was autistic and had a tendency to collect specific kinds of items. Cedar begins to wonder if either Ben or Lisette are somehow leaving the items for her. Eventually, she learns that Miles is leaving them. Miles says he found those items that reminded him so much of Ben. Miles felt Cedar was the only person who would understand his need to share them

Cedar's mother spends her summer trying to build a deck on the back of their summer house. She has no carpentry skills, but she is trying to prove that she can accomplish this project without her husband. A storm blows a tree across the almost-finished deck, destroying it. Cedar's mother says that the deck was a lost cause long before the tree fell.

As the summer comes to an end, Cedar manages to get permission to look into the tunnels below the staging area of Summerlost Festival. She and Leo hope to find something that will give them more information about Lisette. Perhaps, they will get a look at her ghost that is said to wander the halls. Though they do not see Lisette's ghost, Cedar feels Lisette's presence. She thinks this has given rise to the ghost rumors. Cedar takes a ring that belonged to Lisette from the costume room, but she realizes that she must give it back. The costume designer, Meg, knows why Cedar felt the need to possess the ring and forgives her. Cedar's family returns to their home with plans to return to Iron Creek the following summer. Cedar realizes that she has turned a corner in the grieving process and is looking forward to moving on with her life. She also realizes she has met some incredible people. Those people have made unexpected impacts in her life.

More summaries and resources for teaching or studying Summerlost.