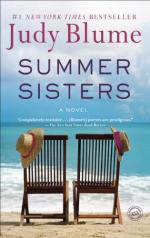 Judy Blume
This Study Guide consists of approximately 87 pages of chapter summaries, quotes, character analysis, themes, and more - everything you need to sharpen your knowledge of Summer Sisters.

Summer sisters Victoria Leonard and Caitlin Somers began spending their summers together beginning the summer after their sixth grade year of school. Their very different lives are chronicled in the novel “Summer Sisters” by Judy Blume. As the oldest child in a middle class family shy, quiet Vix thought she had been visited by a fairy godmother when the popular and vivacious Caitlin asked her to spend the summer at her family’s island house. Although the lives of the two girls took very different paths, they remained loyal to one another and their promise of friendship.

Vix’s distant mother, Tawny, did not want her daughter to go to the Vineyard with Caitlin when Vix first asked her mother for permission. It was Vix’s father, Ed, who convinced Tawny to let the girl go. Tawny felt that once her daughter had experienced the life of the rich, she would never be the same. Once she was on the island, Vix discovered it was not what she had imagined. The house in which Caitlin’s father lived was dark and dirty. He did not supervise his children closely. Caitlin would go for days without taking a bath or changing her clothes. Despite these shortcomings, Vix remained in awe of Caitlin. The two talked about boys, particularly Von and Bru, a cute pair of cousins they met at the Flying Horses, a famous carousel on the island. The girls also experimented sexually with one another and compared the changes in their bodies.

Things changed on the island when Caitlin’s father married Abby. Caitlin was angry because of the changes the woman brought to her father’s house. She also saw the woman as competition for her father’s affection. The addition of Abby to the family had a different affect on Vix. Abby was the mother Vix had always wished she had and Vix was like the daughter Abby wanted. Abby arranged for Vix to get a scholarship to a private school and then helped her get accepted to Harvard University. Meanwhile, Caitlin and Vix had begun dating Von and Bru. The relationship between Vix and Bru became serious the summer Vix turned seventeen. It was also this summer, however, that Vix and Caitlin had their first real fight. At a party for Vix’s seventeenth birthday, she believed Caitlin intentionally manipulated circumstances to make Vix kiss Von, believing she was making out with Bru. Caitlin and Vix reconciled only because Vix’s younger brother Nathan died. Caitlin was the one to tell Vix the news and go with her back to Santa Fe for the funeral.

After high school, Caitlin and Vix’s lives went two different ways. Vix was dedicated to her goal of getting a degree from Harvard and making it on her own even though Caitlin tempted her with trips abroad. Caitlin, who claimed to be studying abroad, spent her tuition money jumping from country to country. When she called Vix, she claimed she was having glorious adventures while living the high life. Vix, meanwhile, struggled to make the grades in school as she tried to keep a relationship with Bru. Even though Bru proposed to her, she ended their relationship when he refused to go to New York or even Boston so she could get a job in her chosen profession.

Years after her breakup with Bru, Vix gets an excited phone call from Caitlin. She’s getting married and wants Vix to be her maid of honor. Vix gets physically ill when she learns that Caitlin will be marrying Bru, but agrees to Caitlin’s request that she participate in the ceremony anyway. The night before the wedding both Caitlin and Bru approached Vix with their concerns they were making a bad decision. Vix’s encounter with Bru leads to a late night fling where they have sex one last time. Vix didn’t feel as guilty after Caitlin tells her the morning of her wedding that she and Bru cheated on Vix just after Nathan’s funeral. Caitlin, like Vix, had also lost her virginity to Bru.

Caitlin and Bru have not been married long when Maizie, their baby girl, is born. Shortly after the child’s first birthday, Caitlin leaves Maizie with Caitlin’s father and Abby. The next time she contacts them, she is in Paris. Years pass with no word from her until Vix receives an invitation to celebrate Caitlin’s thirtieth birthday with her. She goes and the two spend several days together before Caitlin asks about Maizie. She asks Vix when Vix will learn that Caitlin is just self-centered and doesn’t care about anyone else. Vix argues with her that isn’t the Caitlin she knows. When the two part, Caitlin says she is trying to decide if she should accept a proposal of marriage. She plans to go out on her sailboat to consider the proposal and will let Vix know what she’s decided by the time Vix gets back to New York. Vix never receives an answer from Caitlin. Caitlin’s sailboat is found drifting a few days later and Caitlin is never heard from again.

More summaries and resources for teaching or studying Summer Sisters.