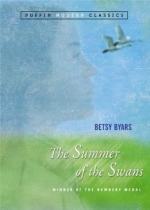 The Summer of the Swans - Chapter 2 Summary & Analysis

Betsy Byars
This Study Guide consists of approximately 42 pages of chapter summaries, quotes, character analysis, themes, and more - everything you need to sharpen your knowledge of The Summer of the Swans.

Charlie breaks his sucker a third time and is afraid to tell Sara because she threatened to throw it away if he broke it again. Charlie stands up and begins shuffling his feet on the steps, an act he has done many times before, as attested by the permanent groves there. Charlie refuses to show Sara his sucker until she forces his hand open. Sara fixes it one more time and tells him to be really careful this time. Charlie goes across the yard to a tent Sara helped him make that morning out of an old blanket and hides inside, feeling safe there.

Charlie is not happy with the idea of upsetting Sara. He is afraid she will take his sucker and throw it away. The sucker is a symbol of Sara and Charlie's relationship. He is dependent on her...

More summaries and resources for teaching or studying The Summer of the Swans.

The Summer of the Swans from BookRags. (c)2021 BookRags, Inc. All rights reserved.