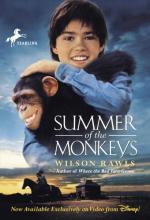 Wilson Rawls
This Study Guide consists of approximately 28 pages of chapter summaries, quotes, character analysis, themes, and more - everything you need to sharpen your knowledge of Summer of the Monkeys.

Summer of the Monkeys Summary & Study Guide includes comprehensive information and analysis to help you understand the book. This study guide contains the following sections:

This detailed literature summary also contains Topics for Discussion and a Free Quiz on Summer of the Monkeys by Wilson Rawls.

The Lee family lives in the late 1800s on a family farm on Cherokee land in the middle of the Cherokee Nation. The farm is in the foothills of the Ozark Mountains on the banks of the Illinois River in northeastern Oklahoma. The family includes Bob Lee and Sara Lee, and their twin children Jay Berry and Daisy. Jay Berry and Daisy are both fourteen years old each and because Daisy was born second, Jay Berry refers to her as his little sister. Daisy was born with a crippled leg. Doctors have advised the family that Daisy's leg can be made to function with an expensive operation. For years, the family has been saving money to pay for the operation. One day, a circus train derails near the Lee farm; one car bursts open allowing twenty-nine circus monkeys to escape. The circus offers a huge reward for the capture and return of the monkeys. Jay Berry, with his trusty hound dog Rowdy, discovers the monkeys have taken up residence on the family farmland in an overgrown area called the river bottoms. Jay Berry consults with his canny grandpa and they attempt to catch the monkeys—without much success. Every time, the monkeys prove too wily. Then a very powerful storm rolls through the area. The domesticated monkeys nearly freeze to death and Jay Berry finds them and rescues them. The gladly follow him home to warm shelter and plentiful food. Jay Berry receives the reward money. He wants to spend it on a pony and a rifle, but instead he gives it to his family so they can finally afford the operation on Daisy's leg. Daisy and her mother travel to distant Oklahoma City and the operation is successful. After six long weeks of recovery, Daisy returns home and runs through the meadows with Jay Berry. She brings home a present for her brother. It is a rifle. Jay Berry's grandfather presents him with another present - a pony.

More summaries and resources for teaching or studying Summer of the Monkeys.

Summer of the Monkeys from BookRags. (c)2022 BookRags, Inc. All rights reserved.