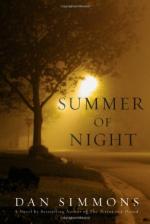 This detailed literature summary also contains Topics for Discussion and a Free Quiz on Summer of Night by Dan Simmons.

For the children of Elm Haven, Illinois, the summer of 1960 promises to be memorable. Their ancient and gloomy school, Old Central, is due to be closed forever, and the children are happy to see it go. But when Tubby Cooke disappears on the last day of school, the children watch as a sequence of events, triggered by a gruesome incident that occurred over 60 years ago, unfolds, resulting in the death of one of their own and the stirring of an ancient evil in the closing school.

After Tubby Cooke disappears on the last day of school, Mike O'Rourke, Dale and Lawrence Stewart, Kevin Grumbacher, Jim Harlen, Duane McBride, and Cordie Cooke decide to investigate the abandoned school and its bizarre staff. They split the assignment up, agreeing to each follow a member of the faculty, while Duane investigates Old Central itself. Duane uncovers that the Bell of Borgia, constructed out of the Egyptian god Osiris' Stele of Revealing and used by Pope Calixtus III and Pope Alexander VI in the early Renaissance. It was found by Mr. Ashley in Italy in 1876 and transported to Elm Haven for the founding of the new school, now called Old Central. The bell carries with it a great and terrible curse, which, once triggered, will bring about an apocalyptic event in sixty years, six months, and six days. Duane is investigating what event might have occurred around the year 1900 to trigger the events of this summer, when he is tracked down and killed by the evil forces that the bell has unleashed on the town.

Dale, Lawrence, Mike, Kevin, Jim, and Cordie must now confront the evil in the school, both to avenge their friend Duane McBride, and to save the town from the impending outbreak of evil. The children arrange a series of ambushes to thin out the ranks of the minions of the school, including many of the authority figures who once ran it. But when Lawrence is captured and taken into the school itself, the remaining children are forced to accelerate their plans and attempt to enter the school, destroy the bell, and rescue Lawrence.