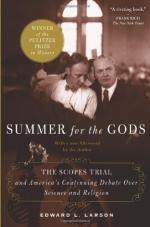 Summer for the Gods: The Scopes Trial and America's Continuing Debate Over Science and Religion Summary & Study Guide

Edward Larson
This Study Guide consists of approximately 36 pages of chapter summaries, quotes, character analysis, themes, and more - everything you need to sharpen your knowledge of Summer for the Gods.

Summer for the Gods: The Scopes Trial and America's Continuing Debate Over Science and Religion Summary & Study Guide Description

Summer for the Gods: The Scopes Trial and America's Continuing Debate Over Science and Religion Summary & Study Guide includes comprehensive information and analysis to help you understand the book. This study guide contains the following sections:

This detailed literature summary also contains Topics for Discussion and a Free Quiz on Summer for the Gods: The Scopes Trial and America's Continuing Debate Over Science and Religion by Edward Larson.

Summer for the Gods: The Scopes Trial and America's Continuing Debate Over Science and Religion focuses on the Scopes trial, also known as the "Monkey Trial," which happened in Dayton, Tennessee in the summer of 1925. The trial took place over a Tennessee law that banned the teaching of human evolution in public schools. The American Civil Liberties Union wanted to challenge the law, and a young teacher named John Scopes, agreed to help them. The so-called "trial of the century" brought together the famed politician and orator, William Jennings Bryan, who led the anti-evolution crusade; and Clarence Darrow, who was regarded as the best criminal defense lawyer of the time. The two men, along with their respective counsels, went head to head in the trail with the prosecution eventually able to uphold the law.

In the first section of the book, Larson lays the groundwork for the trial by examining the socio-political context in the United States during this time. While evolution and religion had coexisted relatively harmoniously during the mid 19th century, more fossil discoveries, the rise of religious fundamentalism, and increased attendance in public high schools influenced the rise of the anti-evolution movement in the United States. The movement, led by William Jennings Bryan, argued that evolution theories were dangerous and should not be taught within the public school system. Advocates for this view argued that the majority should be able to decide such matters and take precedence over individual rights, such as the freedom of speech. The ACLU also organized during the early part of the twentieth century; often taking on cases of individual rights and the first amendment.

After the Tennessee law had been passed banning the teaching of human evolution, the ACLU advertised in Tennessee for a teacher who would be willing to serve as a test case for the law. Leaders in Dayton believed that by becoming part of this they would be able to bring publicity about Dayton to a wider audience and hopefully entice families and businesses to move to town. The leaders asked John Scopes, who had been filling in for the regular biology teacher at the high school, to cooperate with them and he agreed. As these events were made known to the public, William Jennings Bryan volunteered to serve on the prosecution and Clarence Darrow followed for the defense. After a great deal of public strategizing and posturing on the part of both the prosecution and defense, the trial opened on July 10, 1925. The defense challenged the constitutionality of the statute in a motion to stop the indictment, but the judge ruled against them; allowing the trial to go on. The judge also ruled that expert testimony, which the defense had been relying on, could only be entered in written form for appellate review. The jury in the case would never hear or see it. Due to the heat and the crowd that had gathered, the trial was moved to the courthouse lawn. It was there that the defense called William Jennings Bryan, the leader of the prosecution and the anti-evolution movement, to the stand. Darrow peppered him with questions. Eventually, Bryan admitted that he interpreted parts of the Bible; rather than taking an exact literal understanding. The defense waived closing arguments, eliminating a grandstand closing argument by the prosecution. The jury, who had heard very little of the actual proceedings including the Bryan-Darrow showdown, returned nine minutes into deliberation with a guilty verdict.

After the trial, both sides claimed victory. While the prosecution had successfully upheld the Tennessee statute, the defense believed that the popular reaction was clearly on their side. Bryan died in his sleep several days after the trial ended, and other anti-evolutionist crusaders vowed to carry on his cause. In the subsequent appeal, the Tennessee Supreme Court stated that the law applied only to public employees acting in their official capacity and thus did not infringe on freedom of speech. However, they also overturned Scopes's conviction on a technicality.

While neither side was able to claim a clear victory in the immediate aftermath of the trial, the next several decades would create a different legacy for the issue. From the 1930s to 1960s, books and films about the trial argued the defense had won a decisive victory over the anti-evolution campaign, despite their actual loss. Authors wrote about the decline of the anti-evolution movement after the trial, but Larson argues that there was not so much a decline as a fundamentalist turn inward ; where fundamentalism did not actually disappear. Rather, many fundamentalists set out to create separate religiously based educational and social institutions. In the 1960s, anti-evolution statutes were overturned and advocates turned toward trying to pass laws that required the teaching of creationism rather than banning evolution theories.

More summaries and resources for teaching or studying Summer for the Gods: The Scopes Trial and America's Continuing Debate Over Science and Religion.

Summer for the Gods: The Scopes Trial and America's Continuing Debate Over Science and Religion from BookRags. (c)2022 BookRags, Inc. All rights reserved.