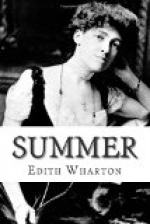 Edith Wharton
This Study Guide consists of approximately 38 pages of chapter summaries, quotes, character analysis, themes, and more - everything you need to sharpen your knowledge of Summer.

It is a June afternoon in the early part of the twentieth century as Summer begins, and nineteen-year-old Charity Royall stands on the doorstep of her home, about to set off for her job at the library. As she looks over the small New England town of North Dormer, she notices a stranger, a young man clearly from the city. Something about him captures her imagination, and she feels, not for the first time, that her small-town life is unsatisfying. She is flustered when he enters the library to ask for books about the local architecture, and he appears flustered as well, struck by Charity's beauty. His questions about the library's holdings remind Charity how little she knows about books, and she is both disappointed and relieved when he leaves.

To clear her head, Charity heads for a hillside, where she lies among the wild flowers...

More summaries and resources for teaching or studying Summer.

Summer from Gale. ©2005-2006 Thomson Gale, a part of the Thomson Corporation. All rights reserved.