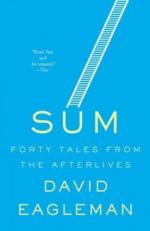 David Eagleman
This Study Guide consists of approximately 25 pages of chapter summaries, quotes, character analysis, themes, and more - everything you need to sharpen your knowledge of Sum.

This detailed literature summary also contains Topics for Discussion and a Free Quiz on Sum: Forty Tales from the Afterlives by David Eagleman.

"Sum," is a collection of stories about the afterlife and the possibilities are endless. The author, David Eagleman, uses the far reaches of his imagination to create forty unique takes on afterlife. Death and what follows is, to many, a mysterious subject and the author capitalizes on that mystique. Eagleman presents his many scenarios of what might be or what could be in the afterlife. The author takes the image of the creator to the extremes. In one narrative, "The Microbe," he describes god as the size of a microbe, so small that he does not know that we exist. In another tale, the reader is told that god is a Giantess who is so large that it is virtually impossible to communicate with her. She does not know we are there!

In several stories god, or the creator, is seen as anything but all powerful. In "Reins," god is perplexed when a committee, urged on by angels, finds him incompetent of deciding who should go to heaven and who should go to hell. In "Narcissus," the creators are called Cartographers. These creatures are smaller than man and equip man's eyes with high-resolution cameras. During their time on earth, humans are to take photos of the earth's terrain so the Cartographers can create accurate maps. But the program is a failure when the creators discover that humans prefer to look at each other rather than at the terrain.

It is obvious that each tale is told with much thought and is told with great detail. There are several stories that compare man to machines. For example, in "The Impulse," the author describes how humans are just like computer chips. He goes to great lengths to describe the networks and the substrates that celestial Programmers build to construct humans. In another story, "Quantum," humans have unlimited storage capacity like quantum computers.

The collection of stories are all thought-provoking and most are written with a light, humorous touch. But there are a few dark stories including "Death Switch." An elaborate system is put in place on everyone's computer in case they should pass without leaving behind their passwords. The people begin to abuse the Death Switch, which eventually leads to suicide and murder.

More summaries and resources for teaching or studying Sum: Forty Tales from the Afterlives.