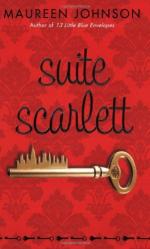 Maureen Johnson
This Study Guide consists of approximately 52 pages of chapter summaries, quotes, character analysis, themes, and more - everything you need to sharpen your knowledge of Suite Scarlett.

"Suite Scarlett" by Maureen Johnson is an entertaining novel about Scarlett Martin, a fifteen-year-old girl whose family owns a hotel in New York City. After Scarlett receives the duty of caring for the Empire Suite on her fifteenth birthday, her summer is thrown into chaos when Mrs. Amberson, an eccentric actress, decides to move into the Hopewell for the summer and becomes involved in the production of "Hamlet" that Spencer, Scarlett's older brother, is acting in. "Suite Scarlett" is an entertaining account of the ways a teenage girl's life changes and the things she learns about herself in one summer as she does the best she can to protect her family.

After Scarlett receives the key to the Empire Suite on her fifteenth birthday and her parents give Spencer three days to get an acting job before forcing him to attend culinary school, Mrs. Amberson checks into the Empire Suite. Mrs. Amberson decides to hire Scarlett as her assistant after determining that she is going to write a book about her life. Therefore, Mr. and Mrs. Martin agree to let Spencer act in a production of "Hamlet" after he gets the role of Guildenstern. While helping Spencer practice his lines, Scarlett meets and is enthralled by Eric, Spencer's scene partner.

When the play's practice space is condemned, Scarlet and Spencer sneak the cast into the basement to rehearse. However, when Mrs. Martin catches them, Mrs. Amberson claims it was her idea because she has decided to financially back the play in exchange for being made the co-director. Mrs. Amberson arranges for the cast to be coached by the famous Billy Whitehouse, but when she learns that her nemesis Donna Spendler is up for a role on Broadway, she sets Donna up for a fake TV audition, causing Donna to lose her Broadway role and shave her hair with the assistance of Scarlett, Spencer and Eric.

Meanwhile, Scarlett and Eric begin to flirt and make out, but Eric tells Scarlett he cannot be a boyfriend right now after she sees him fighting with another girl outside his apartment. Spencer, able to tell something is wrong with Scarlett and to guess what that is, punches Eric during their scene. At the play's dress rehearsal, Donna finds the cast and warns them they are about to be shut down, and Mrs. Amberson moves out of the Hopewell because she decides she has done enough harm.

Refusing to let Spencer's dream die, Scarlett arranges for a meeting between Mrs. Amberson and Donna during which they work out their misunderstanding from thirty years earlier. Scarlett also arranges for Lola and Marlene, her sisters, to take their parents out for the day so that they can use the hotel to host the play. Scarlett has to make their guests leave immediately following the play when she learns that her family is returning early, but she manages to pull the affair off without getting caught. The next day, Mrs. Amberson convinces Mr. and Mrs. Martin that it would be lucrative to host plays in their hotel. She hires Scarlett as her assistant for the talent agency she wants to begin with Spencer as her first client.

More summaries and resources for teaching or studying Suite Scarlett.