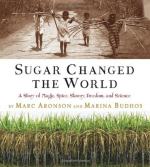 This detailed literature summary also contains Topics for Discussion on Sugar Changed the World: A Story of Magic, Spice, Slavery, Freedom, and Science by Marc Aronson.

Sugar Changed the World: A Story of Magic, Spice, Slavery, Freedom, and Science by Marc Aronson and Marina Budhos tells the history of sugar. Beginning with the discovery of sugar, the authors trace the history of how it became popular, how its usage spread around the world, and how it affected the lives of the rich and the poor.

Around 510 BC, Herodotus wrote about a sweet reed that produced honey. Much later, around 326 BC, Nearchus came across this reed as he set out to investigate India's coast. Cane sugar traces back to the area we now call New Guinea, and most likely it was cultivated by humans for approximately 5,000 years or more before the Greeks. The first written record of the substance was from India. According to Hindu writings, it was used in religious ceremonies, put in a special fire to offer to the gods.

Life as a slave was brutal. They worked long, hard hours in extremely hot conditions. Exhausted workers lost limbs and sometimes their lives as overseers drove them to complete tasks. They were beaten and tortured if they didn't do what they were supposed to do, and the price for running away was extremely steep.

Back in Europe, sugar was available for all classes, not just the wealthy. The people of England learned about hot drinks such as hot chocolate, tea, and coffee. They sweetened the drinks with sugar. Poor people found tea to be a cheap substitute for the beer they usually made. Factory workers used tea and sugar as a way to get enough energy to make it through the work day. It was truly the Age of Sugar.

Some people began questioning the morality of slavery. Were all men created equal as some stated? If so, what did this mean in regards to owning slaves? During the 1700s, there was great unrest in Europe. Abolitionists protested slavery, educating the masses on what was really going on in sugar production. Europeans fought for their own rights, but they wanted to continue owning others.

The slaves starting fighting for equality and rebelled. The Republic of Haiti was born in 1804. By the 1800s, Hawaii became another primary place of sugar production. Here, the plantations were not worked by slaves from Africa. People from China, Japan, the Philippines, and Portugal worked for extremely low wages on these plantations.

In India and other places, people hired desperate workers who would sign on for a certain number of years in exchange for daily wages, food, and clothing. The work was hard, and the wages were very low. While the people weren't technically slaves, their lives were very similar. Scientists found new ways to make sweet substances that could take the place of sugar. The indentured people rose up, and slavery was abolished. The Age of Sugar was over.