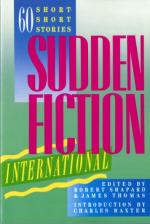 +Chapters Summary and Analysis
The Falling Girl, Death of the Right Fielder, Blackberries, Don't You Blame Anyone
On Hope, Happy Endings, The Grasshopper and the Bell Cricket, Girl, The Other Wife
La Volpaia, An Insolvable Problem of Genetics, House Opposite, Love Your Only Mother, The Laugher
August 25, 1983, The Elephant, Homage to Isaac Babel, One of These Days
Welcoming the Board of Directors, The Boy, The Weather in San Francisco, Blue, The Grass-Eaters, Preparations
At the River, The Blue Jar, Gregory, Iguana Hunting
Disappearing, A Lover's Ear, By the Creek, The Book, Facing the Light, Lost Keys
Arrest Me, Orion, The Verb To Kill, All at One Point, Bigfoot Stole My Wife
Mr. and Mrs. Martins, Di Grasso, The Street-Sweeping Show, Courtly Vision, The Model
Terminal, Emilie Plead Choose One Egg, There's a Man in the Habit of Hitting Me on the Head with an Umbrella, Family Album, The Last Days of a Famous Mime
The Shoe Breaker, Katya, Looking for a Rain God, The School, The Fifth Story
Tancredi, Las Papas, The Black Dog, Snow, The Explosion in the Parlor
Free Quiz
Characters
Objects/Places
Themes
Style
Quotes
Topics for Discussion
Order our Sudden Fiction International: Sixty Short-short Stories Study Guide

Robert Shapard
This Study Guide consists of approximately 37 pages of chapter summaries, quotes, character analysis, themes, and more - everything you need to sharpen your knowledge of Sudden Fiction International.

Martaappears in The Falling Girl

Marta begins The Falling Girl by looking over the side of a skyscraper and leaping. She is a young, lively girl, and there is a party on the first floor. As she falls past the upper windows, young men beg her to stay, but she politely declines. As she falls farther, she passes hard-working people who pay no attention. As the sun sets and Marta nears the ground, she grows tired and feels older. She notices younger, prettier girls falling faster to the part below. By the time Marta reaches the lowest floors, an old couple is commenting how tired and old she looks.

The Boy in Blackberries is about five years old and growing up in Wales. When the story begins he is getting his hair cut for the first time so that his mother can buy him a cap. After the haircut, they buy the smallest cap in the clothiers, though it is still slightly large on him. That night, the boy goes on a walk with his father, and they pick blackberries for themselves and the mother. When the boy and his father get home, they discover the lining of his cap is ruined from the blackberries they carried in it. The mother is furious, and the boy witnesses the first fight he has ever seen. He realizes that he, his father, and his mother are all different people, and he cries.

The Gypsy in On Hope lives on Gibraltar and trains moneys to steal for him. One day, his most effective monkey returns to him with the Hope diamond, the largest diamond in the world, a part of the British crown jewels, and a cursed stone. The Gypsy sends it back to the visiting princess, but the monkey steals it again. He sends it back once more, and the monkey returns with it before dying, having been shot by a British guard. The gypsy swims out in the Mediterranean to dispose of the diamond, but it lands on a shark, who rises to the surface with the jewel on its dorsal fin. The story ends with the Gypsy, thinking a miracle has occurred, swimming towards the shark in earnest.

The Hermit in House Opposite is an ascetic living in India. He is focused on meditation, cleanliness and purity; so he is deeply dismayed by the presence of a prostitute in the dwelling opposite his. At first he is merely annoyed by her loud gatherings, but after a time he becomes obsessed with her sinful ways. He can think of nothing but her, and eventually he resolves to tell her to leave for shame. On the hermit's way across the road to her house though, he is intercepted by the prostitute. She has a tray of offerings and asks his blessing. He obliges.

Borges is both the author and two of the central characters of August 25, 1983. At the beginning of the story, Borges meets himself in twenty-three years in a hotel room. The older Borges is committing suicide, having realized that death is not to be fought while giving a lecture on the Aeneid. The younger Borges initially refuses to believe his older self, but after a time he begins to ask the dying man what will happen in the intervening years. The older Borges tells the younger that he has already seen his best years and done his best work. The older Borges finally passes away, and the younger leaves the hotel room dejected.

Helenaappears in The Blue Jar

Helena is the daughter of a wealthy and influential British merchant in The Blue Jar. One day the vessel they are on begins to sink, and Helena and her father become separated. She survives on a life raft with a young sailor. When she and the sailor make it back to England, her father is overjoyed, but concerned for her reputation, he pays the sailor never to see her again. Soon thereafter, Helena takes to the sees again, obsessed with finding a particular shad of blue. This search consumes her life, and she never settles in one place. She knows she will eventually die on the sea. In China, she finds a jar with the perfect shade of blue. She dies that night.

Gregory is a prisoner of Cyprian nationalists in the story bearing his name. He is a dull but affable underling, and he was captured along with his superior. For the time of his imprisonment, Gregory is liked by his captors. He tells them about his wife and regularly cooks and does their mending. Eventually, both Gregory and his superior are sentenced to death, and Gregory's body is to be strung up on a pole. When he faces his executioner, a man he has come to like, he think he is the butt of a joke. Gregory dies after several shots, clinging to his executioner's leg. He is buried instead of hung up.

The unnamed wife of Disappearing is significantly overweight at the beginning of the story. Her husband emotionally abuses her and browbeats her into sex. She takes swimming lessons and begins swimming laps daily to escape her life. After a time she loses weight, and everyone compliments her. She does not care, though; she is not swimming to lose weight. She wants to disappear from the world. She loses more weight, to the point that no one recognizes or even notices her anymore.

Ron is a man who loves to fish, and in Lost Keys he goes regularly with his friend, the narrator of the story. Ron does not make small talk or fish haphazardly. He always catches his limit. As time goes one, either through a degenerative disorder or through simple age, Ron begins to lose hold on information. One day during a fishing expedition, he loses his keys for over an hour when he is just sitting on them. He is distraught and hates himself. It is the last time he goes fishing.

Artemis is presented in modern terms in Orion. She is Zeus's daughter and asks him permission to wander the forest as a huntress rather than getting married. He agrees, and Artemis spends years in the wood trying to escape herself. One day she meets Orion, who has happened upon her camp and eaten her goat. Artemis thinks he is dumb, but she tells him all about her life. When she falls asleep, Orion rapes her. Artemis then kills Orion with a scorpion. She buries him and departs her camp, but the world now seems different.

Orion is the product of the urine of three gods in the story bearing his name. He is a boorish and dull hunter who one day happens upon Artemis's camp and eats her goat. That night, when Artemis falls asleep, Orion rapes her. She then proceeds to kill him with a scorpion, and he dies slowly. He passes in the morning, and Artemis buries his body. Orion spends some time in the underworld fighting and crying, but eventually the gods let him go to the stars with his dog.

Nick of Di Grasso is a member of an opera company in Soviet era Odessa. He is indebted to the conniving manager of the company, Schwartz. Nick pawns his severe father's prized watch to Di Grasso, who refuses to buy it back. As such, Nick resolves to leave for Constantinople. The night before his flight, Nick sees a performance by the company's prime attraction, Di Grasso. Nick is moved to tears by the performance, and Schwartz's wife sees it. She forces her husband to give Nick his watch back.

Ephraim is an aged widower in The Model. When he was younger, he took art classes, and now that he has resolved to try to paint again. He calls an art school and talks the operator into sending a woman in her thirties to model for him. Ms. Perry, a severe woman, arrives and poses for him. After a moment, though, she deduces that he is not a working artist. She accuses him of bringing her over to leer. He apologizes, but Ms. Perry forces him to strip for her so she can draw him. He does, and she blots out her drawing after she is done. After she has left, Ephraim decides his life is over.

Mimeappears in The Last Days of a Famous Mime

The famous Mime in this story is known for his reactions of terror that inspire fear in the audience. In his last tour, the Mime decides to switch into other styles, but he cannot inspire an audience with them. He begins carrying a box of blue string around, an act that confuses those around him. His lover leaves him, and the Mime announces he will no longer perform for an audience, only individual command performances for whoever asks. He goes to great lengths to perform one word interpretations, culminating in his downing himself when a person asks him to perform 'sea'.

Edgar is the teacher of a third grade class that is trying to understand all the death that has infiltrated the class projects. They lose, in the space of a couple months, a set of orange trees, an herb garden, snakes, fish, and a puppy. Meanwhile, two of his students are killed in an accident and several parents die in various ways. The teacher talks to the class about death, and he is forced to answer some unusually philosophical questions. The children ask him to make love to his teaching assistant for them. He is about to when a new gerbil arrives.