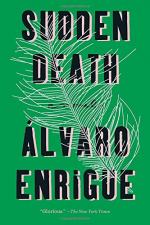 This detailed literature summary also contains Quotes and a Free Quiz on Sudden Death: A Novel by Alvaro Enrique.

Sudden Death is set in several historical moments in numerous countries and continents. It features a fictional tennis match taking place in 16th Century Rome between the artist Michelangelo Merisi de Caravaggio and the Spanish poet Francisco Gómez de Quevedo; a retelling of key moments from the history of Hernán Cortés and the Spanish destruction of the Aztec Empire; the passage across Europe of a tennis ball made from the hair of Queen of England Anne Boleyn after she was beheaded; and discussions of the Counter-Reformation in Rome alongside numerous historical extracts discussing the game of tennis. All of these narrative strands are interwoven together in a non-linear order. For the purposes of this summary, the main strands are summarized separately.

At the tennis match, the reader is introduced to the match from the poet’s perspective: he is losing. The poet (Quevedo) is accompanied by his friend, known as the Duke, while the artist (Caravaggio) is accompanied by a man known only as the mathematician. These two men are eventually revealed to be the Duke of Osuna and the mathematician Galileo. As the match continues the advantage shifts back and forth between the artist and the poet while the chapters about the match slowly reveal the details that led up to the match taking place. The night before, the poet and the artist had gotten very drunk together alongside a group of their friends. Both men went outside to urinate at the same time and ended up wandering the streets together. Later, the artist and the poet began to kiss and the poet reached under the artist’s clothes to feel his erection. They were interrupted the Duke. In his shame over being caught engaging in a homosexual act, the poet accused the artist of trying to rob him. The poet challenged the artist to a duel and it was agreed that the duel would take place in the form of a tennis match.

A Frenchman named Jean Rombaud was hired to perform the execution of the English Queen Anne Boleyn. He did not take any payment in the form of money, instead taking away her hair which was made into tennis balls. Rombaud traded the balls for a position in the French court, keeping one for himself. Later, Rombaud was executed and the ball came into the possession of Phillipe de Chabot, a minister to the French King. Chabot sent the ball to Rome as a bargaining tool where it passed amongst several influential members of the Vatican. Through a series of coincidences, the ball came into the possession of Caravaggio who used it during his tennis match with Quevedo.

Hernán Cortés arrived in Mexico and used his mistress/lover/slave Malinalli as a translator. Malinalli misled people in her translations for her own political gain. She told the natives that Cortés and his army were there to overthrow the Aztecs. After a period of violently destructive war, the Aztec empire was defeated. Cortés had the emperor Cuauhtémoc tortured and executed. Afterwards, he had a scapular made from the hair of the fallen emperor. This scapular was later inherited by the Duke of Osuna who lent it to Quevedo during the tennis match for good luck. In the aftermath of the destruction of the Aztecs, most of the ancient native culture and written records were destroyed. A priest named Vasco de Quiroga read a copy of Utopia by Thomas More and used it to help rebuild society there. It was a successful scheme because, unknown to Vasco, the society described by More closely matched the way society had functioned in the area before the Spanish conquests. A local artist named Huanitzin made a mitre out of feathers as a gift for the Pope. Later in the novel, the mitre is seen by both Caravaggio and Galileo, whose own work is influenced by the beauty and skill of Huanitzin’s craft.

The novel ends with juxtaposed descriptions of the poet insisting that he can continue with the match despite being injured, and Caravaggio and Vasco separately encountering and admiring the mitre in different countries and in different historical moments. Caravaggio wins the tennis match.