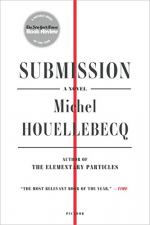 Michel Houellebecq
This Study Guide consists of approximately 59 pages of chapter summaries, quotes, character analysis, themes, and more - everything you need to sharpen your knowledge of Submission.

This detailed literature summary also contains Quotes and a Free Quiz on Submission by Michel Houellebecq.

This guide was created from the following version of this book: Houellebecq, Michel (translated by Lorin Stein). Submission. Farrar, Straus, and Giroux, 2015.

Submission consists of the narrator, Francois's, memories of the year 2022 in France. A Parisian literary academic, Joris-Karl Huysmans specialist, and professor at the Sorbonne Paris III, François felt that his life as a sexual being had come to an end. Since the completion and overwhelmingly positive reception of his dissertation, François engaged in year-long romantic liaisons with his students. He had not produced any work of value in over a decade, and wondered what he would do with his life before he died.

Meanwhile, France was in the midst of a political revolution. Two outside parties, the National Front and the Muslim Brotherhood, replaced the traditional French parties, the center-right UMP and the center-left Socialist party, in the general election. Both parties proposed a complete overhaul of the political status quo: the National Front wanted to severely limit immigration and secede from the European Union while the Muslim Brotherhood, led by the charming Mohammed Ben Abbes, wanted to change societal norms to reflect the values of Islam. Afraid of the inevitable anti-Semitism that an Islamic government would incite, François’s young, attractive girlfriend, Myriam, fled to Israel. Lonely, François began seeing escorts but was left unsatisfied by his sexual encounters with them.

Fearing violence and civil war, François fled Paris on election day. Driving down deserted roads dotted with corpses, he ended up in the historic town of Martel. While there, François discovered that a series of terrorist attacks, in which nativist and Jihadi forces stole the ballots, occurred earlier in the day. A recount was held, and as a result of a surprising endorsement by the UMP, Mohammed Ben Abbes won by a landslide.

Meanwhile, François took refuge in Rocamadour, a famous medieval Catholic stronghold. Every day in Rocamadour, François visited the famous statue of the Black Virgin. After about one month, he decided to return to Paris. His mother and father both died soon after his return, and François decided to visit the monastery, Ligugé Abbey, where Huysmans took his vows. François was unmoved by the monk’s lifestyle and returned to Paris after only a few days.

Back in Paris, François’s academic career started to pick up. After the Muslim Brotherhood came to power, he was forced into early retirement because he was not a Muslim. However, upon his return from Ligugé abbey, François was asked to come to work for the Saudi-run Islamic University of Paris-Sorbonne by the minister of education, Robert Rediger. Over wine, Rediger explained that François would have to convert to Islam but would enjoy a major salary increase. François had always considered himself an atheist, but was persuaded by the promise of multiple wives. The Muslim Brotherhood legalized polygamy after they were elected, and Rediger assured François that a man of his status would be given up to three wives. After, a short period of deliberation François decided to accept the position and convert to Islam. He imagines his future as a successful academic with young beautiful wives.

More summaries and resources for teaching or studying Submission.