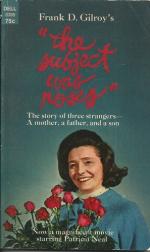 Books Like The Subject Was Roses by Frank D. Gilroy | Suggested Reading

Frank D. Gilroy
This Study Guide consists of approximately 50 pages of chapter summaries, quotes, character analysis, themes, and more - everything you need to sharpen your knowledge of The Subject Was Roses.

Gilroy's I Wake Up Screening!: Everything You Need to Know about Making Independent Films, Including a Thousand Reasons Not To (1993) is a less-than-rosy picture of the independent film industry. Gilroy wrote it while directing, producing, and distributing four independent feature films.

Useful for anyone in an intimate relationship, How Can I Get Through to You: Reconnecting Men and Women (2002) by psychotherapist Terrence Real is an analysis of what is wrong with contemporary marriages and provides a prescription for improving them.

Produced on Broadway only two years before The Subject Was Roses, Edward Albee's Who's Afraid of Virginia Woolf (1962) is also...

More summaries and resources for teaching or studying The Subject Was Roses.

The Subject Was Roses from Gale. ©2005-2006 Thomson Gale, a part of the Thomson Corporation. All rights reserved.