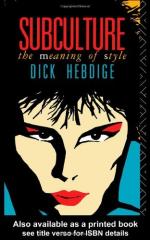 Subculture, the Meaning of Style Summary & Study Guide includes comprehensive information and analysis to help you understand the book. This study guide contains the following sections:

This detailed literature summary also contains Topics for Discussion and a Free Quiz on Subculture, the Meaning of Style by Dick Hebdige.

Dick Hebdige's Subculture is a structuralist approach to understanding the styles of Britain's youth cultures. Hebdige argues that style, through the subversion of common objects, allows Britain's subcultures to symbolically separate themselves from the mass culture to which they belong. By defining this separate system of symbols, these subcultures challenge tradition, denying the context of the mass culture. In this way, otherwise powerless teenagers can be transformed into the socially significant punk rockers.

Hebdige considers a wide range of subcultures, from the infamous skinheads to the spiritual Rastafarians to the chameleon-like mods. He takes an in-depth look at each, considering not only the why of their existence, but also the how. He examines the way in which style reflects and articulates the underlying principles of subcultures, both internally and in the context of society. In so doing, Hebdige explores concepts which are, at their core, inherently human in nature.

Hebdige makes liberal use of both structuralist and Marxist concepts. Society, as presented by Hebdige, is a complex system of interrelated parts, with the significance of people, places and things defined by a dominant consensus. When subcultures seek to define the world in their own terms, conflict is the result. The manner in which this conflict is articulated Hebdige calls style. Subcultures carve meaning from the social space of the dominant culture. The dominant culture reacts by moving to assimilate the subculture into the dominant narrative.

Hebdige also explores the way in which black subcultures influenced white youth subcultures. Punks learn the value of style from reggae's concept of "dread," cultivating an imposing aesthetic inspired by the "otherness" of black culture. Hipsters, in their clean, stylish clothes, embrace black dreams of upward mobility; whereas, beats, in their torn jeans and sandals, embrace black poverty. For Hebdige, blacks serve as a touchstone. They are the standard by which other subcultures are judged.

Of central concern to Hebdige is the inherently oppressive quality of the dominant culture. He discusses the idea of subcultures as cultural noise, representing an interference in the mass culture. This noise suggests a blockage, an area where society has failed to address the needs of certain individuals. Style is the manner in which these needs are subversively articulated. By transgressing on society's sacred definitions, subcultures call attention to these blockages. Either the dominant culture moves to correct these blockages, or else it assimilates, and thus nullifies, the subculture's style.

Hebdige describes several ways in which the dominant culture can undermine style. Through commodification, or media scrutiny, an understanding of style can be achieved apart from its relevant subculture. Removed from its context and judged by foreign standards, the style becomes inert, incapable of articulating the need of the subculture. A subculture deprived of its style is then left to articulate itself in new ways.

Ultimately Hebdige concludes that style cannot be understood outside of its context, conceding that none of the considered youth cultures would recognize themselves in Subculture. In attempting to understand subculture, imagination unwittingly fills the many blanks. Both writer and reader serve as mythologists, obscuring the matter with presuppositions and assumptions. Style is truly found only in its living articulation as style.