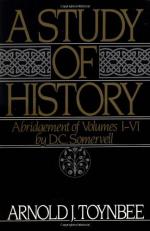 Additional Resources for A Study of History by Arnold J. Toynbee

Arnold J. Toynbee
This Study Guide consists of approximately 58 pages of chapter summaries, quotes, character analysis, themes, and more - everything you need to sharpen your knowledge of A Study of History.

Geyl's text includes four chapters that deal with A Study of History. Geyl criticizes Toynbee's method as not being genuinely empirical, and he also disputes Toynbee's pessimistic assessment of the state of Western civilization.

This work is compiled from a lecture course that Ortega gave on Toynbee. Largely hostile to Toynbee, Ortega accuses him of having a mystical approach to history and of relying too much on Greco-Roman history as the key to all other civilizations. Ortega also claims that Toynbee makes major factual errors.

Samuel, Maurice, The Professor and the Fossil, Knopf, 1956.

Samuel disputes Toynbee's description of the Jews as fossils of the extinct Syrian civilization with its implication that Jewish culture is lifeless and unproductive.

More summaries and resources for teaching or studying A Study of History.

A Study of History from Gale. ©2005-2006 Thomson Gale, a part of the Thomson Corporation. All rights reserved.