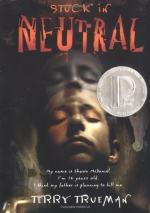 This detailed literature summary also contains Topics for Discussion on Stuck in Neutral by Terry Trueman.

Fourteen-year-old Shawn McDaniel is convinced his father is trying to kill him, not out of anger but from love. Shawn has cerebral palsy (CP). A blood vessel in his brain burst when he was born, leaving him without any muscle control. This means Shawn cannot walk, lift his arms on his own accord, or even smile. Unfortunately, his family believes Shawn is not only completely physically inept, but they also assume his brain is dysfunctional. That is only partially true.

In reality, Shawn’s brain is fully functional. For example, Shawn is blessed with the ability to remember everything he has ever heard, from commercials to conversations. This would seem to make him a genius. However, Shawn’s brain cannot put his thoughts and memories into words and, therefore, he is forced to live out the world in his own mind, without the capability to let others know he is alive inside his dysfunctional body.

Stuck in Neutral is set in the backdrop of Seattle, Washington, where Shawn lives with his mother and two siblings, Cindy who is 17, and Paul who is 16. Shawn’s mother is his primary care giver; she feeds him his meals and takes care of his needs every day. His father left shortly after Shawn was born because he couldn’t handle seeing his son in pain, particularly watching Shawn suffer through his seizures. Shawn has anywhere from six to twelve grand mal seizures each day. While these seizures were painful when he was younger, Shawn has adapted to them and now finds he can leave his body during the seizures and gain a sense of freedom as he floats around the greater Seattle area during these lapses. Thus, despite his father’s revulsion toward the seizures, Shawn loves them.

Shawn’s father, Sydney E. McDaniel, won the Pulitzer Prize for a poem he wrote about Shawn’s illness and the effect it had on their family. The poem discusses Sydney’s struggle to come to terms with Shawn’s disability and the pain, both physical and emotional, the seizures cause for both father and son. As the novel progresses, the reader learns Shawn’s father is working on a new project. Using Earl Detraux as an example, Shawn’s father attempts to show the emotional side of having a son like Shawn, and the struggles families, like the McDaniel’s, endure every day. This project climaxes as his father goes on an afternoon talk show, the Alice Ponds Show, to discuss Earl Detraux, a man who suffocated his disabled two-year-old son. Here, Shawn’s father does not want to portray Earl as a murderer, but instead as a man who had no other choice but to end the suffering of his child, a man who gave his own life to save his son. Sydney shows the audience the complicated nature of love; Earl Detraux ended his son’s life out of love.

After learning about this project, Shawn is alarmed he will suffer the same fate as Earl’s Detraux’s son. Shawn knows his father loves him and wants to do what he believes is best. However, Shawn wants to live, but he cannot protest. He cannot tell his father that he actually likes his seizures and that he wants to live; he cannot explain that he wants to experience life, even if it is in a limited form. Due to his disability, Shawn is rendered incapable of speaking or conveying his true feelings.

The novel closes as Sydney sits on Shawn’s bed, pillow in hand, and, through tears, professes his love for his son. Lapsing into a seizure, Shawn knows he will be unconscious when Fate runs its course, but he peacefully puts his life in his father’s hands.