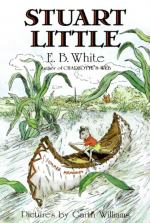 This detailed literature summary also contains Quotes and a Free Quiz on Stuart Little by E. B. White.

The following version of this book was used to create this study guide: White, E.B. HarperTrophy Publications, 1973.

Stuart Little tells the story of the Little family's second son, Stuart. As soon as Stuart is born, the family knows he is different, because Stuart is a mouse whereas the rest of the family is human. Although Stuart is perfectly healthy and develops normally, he struggles to adjust to a home designed for humans. Despite the various difficulties he faces, however, Stuart manages to help out around the house, finding items lost in small places, like his mother's ring stuck in the drain.

It becomes clear that Stuart possesses a courageous spirit and seeks out adventure whenever he can. For example, Stuart travels alone to Central Park and befriends the owner of a small boat, Dr. Carey. Stuart races Dr. Carey's boat, called the Wasp, against another boat and wins.

Shortly after this adventure, a bird named Margalo is injured by the Littles' house. The family takes her in to care for. Stuart and Margalo become fast friends, and Stuart seems to hold romantic feelings for Margalo. One night, the family cat Snowbell attempts to eat Margalo in her sleep, but Stuart protects Margalo by shooting Snowbell's ear with a bow and arrow. A few days later, Margalo saves Stuart's life when Stuart accidentally becomes trapped in a garbage truck and is almost dumped into a river outside of New York City.

Margalo and Stuart's friendship is tragically cut short, however, when Margalo learns that Snowbell is plotting to kill her and she escapes the Littles' house without telling anyone. Margalo decides to head north. When Stuart realizes Margalo has left, he resolves to find her. Stuart begins traveling through New York City, experiencing a series of adventures on the way. At first, Stuart accidentally crashes Dr. Carey's automobile; Stuart then finds himself teaching a classroom of schoolchildren. As his travels continue, he keeps searching for Margalo.

After this disastrous date, Stuart resolves to continue his journey to find Margalo. As he departs from Ames' Crossing, he meets a repairman who advises Stuart to go north. At the end of the novel, Stuart has not yet find Margalo, but he is convinced he is "headed in the right direction" (131).