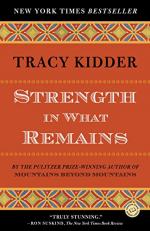 Tracy Kidder
This Study Guide consists of approximately 74 pages of chapter summaries, quotes, character analysis, themes, and more - everything you need to sharpen your knowledge of Strength in What Remains.

Strength in What Remains Summary & Study Guide includes comprehensive information and analysis to help you understand the book. This study guide contains the following sections:

This detailed literature summary also contains Topics for Discussion on Strength in What Remains by Tracy Kidder.

The following version of this book was used to create this study guide: Kidder, Tracy. Strength in What Remains: A Journey of Remembrance and Forgiveness. Random House. New York, NY. First edition, 2009. Following the introduction, the author writes in third-person, biographical prose of the life and experiences of the book’s central character, Deogratias; his last name is not given, and he is referred to throughout the narrative as “Deo.” The second part of the book is written in first-person, more memoir-like prose, about a trip that the author made, with Deo, to the latter’s home country of Burundi.

The first part of the book is entitled “Flights,” and follows two narrative threads. The first follows Deo as he leaves Burundi, which is in the midst of a bloody and violent ethnic civil war, and builds a life for himself in New York City. That new life begins with virtual homelessness, with being unable to speak English, and with struggling to survive on only a few dollars a day earned by delivering groceries. Chance encounters while working eventually lead Deo into the lives of supportive Americans who find him a safe place to live, help him acquire more money, and eventually continue his education – he had been a medical student in Burundi, but he had had to abandon his studies because of the war.

The second narrative thread in Part One is essentially a flashback, chronicling Deo’s poverty-stricken childhood, his education, his determination to establish a career in medicine, and his escape from almost certain death in the civil war. This narrative thread contains detailed descriptions of both the violence associated with that war and Deo’s encounters with that violence, several of which left him traumatized and prepared to give up his quest for freedom. Nevertheless, the unexpected kindness of others helped him to survive, in a similar way to how similar kindnesses helped him in New York.

There are references in both threads to the ongoing ethno-cultural conflict in Burundi between the two factions – Hutus and Tutsis - whose names are familiar as a result of the more widely publicized genocide in Rwanda, Burundi’s northern neighbor. These references consider and discuss the origins of this conflict, and how it played out in both countries over a number of years. Deo identifies as a Tutsi, but there are frequent comments in the narrative on how the actual distinctions between the two ethnic communities are minimal, and that hatred based on those distinctions was fanned by European colonizers who utilized it and exploited it for their own economic and political benefit.

Part One ends at the moment it began – with Deo arriving at the airport in Burundi’s capital, at the beginning of his journey into a new life of freedom and safety. Part Two is subtitled “Gusimbura,” a term in Deo’s native language that refers to the experience of being awakened to painful memories. Part Two is written from the first-person narrative perspective of author Tracy Kidder, who became acquainted with Deo while the latter was living and working in Boston, “about a decade after he had fled Rwanda and Burundi” (149). Over time, the author says, they became friends, to the point where he accompanied Deo on the trip back to Burundi that is the focus of Part Two’s narrative.

Before that trip begins, author Kidder also takes Deo on visits to places that were significant to him during his life in New York City. This process of visiting such places continues when Kidder and Deo go to Burundi, with Deo visiting places like his home village, the city where he went to medical school, the small rural town where his attempt to escape began, and the mountain village where his family now lives. The whole while, the narrative’s focus remains focused on Kidder’s reactions to what he learns of events and of his friend; and on Deo, who is there to both come go grips with his many painful memories and to establish a rural clinic that he has dreamed of building for his community, his country, and all its peoples (Hutu and Tutsi alike) ever since he was a child.

The narrative concludes with detailed descriptions of how he made that dream a reality, and how the clinic did indeed welcome persons on both sides of the country’s ethnic divide, showing those persons how possible it actually was / is to live together in peace.

More summaries and resources for teaching or studying Strength in What Remains.

Strength in What Remains from BookRags. (c)2022 BookRags, Inc. All rights reserved.