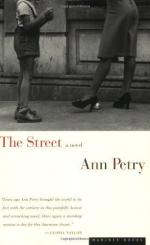 Ann Petry
This Study Guide consists of approximately 50 pages of chapter summaries, quotes, character analysis, themes, and more - everything you need to sharpen your knowledge of The Street.

The Street Summary & Study Guide includes comprehensive information and analysis to help you understand the book. This study guide contains the following sections:

This detailed literature summary also contains Related Titles and a Free Quiz on The Street by Ann Petry.

The novel begins in New York City on a cold and windy day in November of 1944. The story begins with the main character, Lutie Johnson, looking at an apartment available for rent. Lutie has two strikes against her from birth. She is black, and she is a woman. The women in the story show how their past experiences and current circumstances makes it virtually impossible for a black woman to ever achieve anything more than what they have managed to achieve.

Lutie and her son, Bub, have been living with Lutie's father and his girlfriend, Lil. Lutie wants to get Bub away from Lil. Bub is only eight years old and Lil has him lighting her cigarettes for her and she is giving him sips of gin. Lutie fears Bub will develop a taste for cigarettes and gin, and she also fears whatever else Lil might teach the young boy.

Through a flashback to the Chandler's home in Connecticut, Petry reveals how Bub and Lutie have ended up without Jim, Lutie's husband and Bub's father. While Lutie was working for the Chandler family she was gone for long periods of time. Jim felt emasculated due to his inability to provide for his family and he took up with another woman to help rebuild his ego. The adult male characters in the story, whether white or black, show what little respect they hold for women. They see the women as little more than sex objects.

Lutie works really hard and eventually manages to pass a civil servant test, which enables her to get a white-collar job. The payment for the job is still low, and she and Bub are just barely able to survive. She is trying to find a way to get her and Bub into a nicer neighbour so that she can raise the boy properly. However, she is losing her battles because of her skin color and her gender.

Lutie's attempts to obtain financial stability are ultimately defeated in the final chapter. The reader is left contemplating whether Lutie ever really had a chance to achieve her goal or whether she was doomed for failure from the beginning.

The Street from BookRags. (c)2022 BookRags, Inc. All rights reserved.