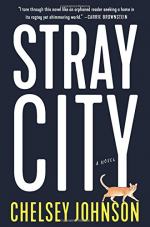 Stray City tells the story of Andrea Morales, a 20-something lesbian living in Portland, Oregon during the 1990s. After a breakup with Flynn, Andrea decides it is time to put herself out there. Andrea is just looking for a hookup, but ends up spending time with a friend named Ryan. After too much drink, Andrea ends up making out with Ryan. While Andrea resists the idea of pursuing a relationship with a man, she and Ryan gradually become closer.

Their relationship begins over Scrabble and conversation. Each time they get together, Andrea and Ryan go a little further. Andrea ends up having sex with Ryan, forcing her to confront her sexual identity. Andrea knows she is not bisexual and strictly identifies as a lesbian. She continues to sleep with Ryan because she is seduced by doing something that is secretive.

When Andrea ends up pregnant, she decides to have an abortion and not tell anyone, including her friends and Ryan about the pregnancy. Andrea does not want to deal with the backlash of confessing to her friends that she had sex with a man. Andrea ends up telling Ryan about the pregnancy and he offers to help her pay for the abortion. However, Andrea is having doubts. She thinks this may be her one and only chance to have a child of her own and decides to keep the baby.

Andrea tells her friends that she is having a baby with Ryan. Andrea and Ryan try cohabitating and attempt to make their relationship work. Andrea even goes so far as to tell Ryan that she loves him, but secretly does not think it is enough. Ryan ends up going for a drive one night and keeps driving until he settles somewhere in Minnesota. Andrea is left to raise the baby on her own, which may be what she wants.

When Lucia is about ten years old, she discovers a collection of Ryan’s old records in Andrea’s attic. Lucia recognizes her guitar in the image and begins to speculate about her father’s identity. Lucia tracks down a number for Ryan in Minnesota and calls and leaves a message for Ryan. Lucia’s phone calls to Minnesota are discovered when Andrea gets the long-distance phone bill. Lucia asks Andrea questions about her father’s identity. When Lucia learns Ryan is her father, she asks Andrea to let her meet him.

Andrea, her girlfriend Beatriz, and Lucia go on a road trip to Minnesota so that Lucia can meet Ryan. Ryan must confront how introducing Lucia into his life will affect the life he has built in Minnesota. Ryan must also confront whether or not he still has feelings for Andrea as well. Ryan and Lucia meet and he is able to see himself in Lucia and her love of music. Ryan and Andrea begin to reconcile their past and try to figure out how to do right by Lucia.