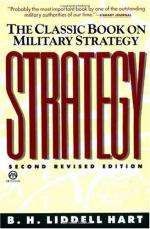 Basil Liddell Hart
This Study Guide consists of approximately 42 pages of chapter summaries, quotes, character analysis, themes, and more - everything you need to sharpen your knowledge of Strategy.

This detailed literature summary also contains Topics for Discussion and a Free Quiz on Strategy by Basil Liddell Hart.

This book is the sort that could serve quite well as a textbook on military strategy. It provides a historical overview of the subject from an undenied European bias from as far back as the fourth century BC up through the present. Describing real battles and the generals and great captains who led them is the method that the author uses to get the main principles of military strategy across to the reader.

At the outset, the main cause and method of war as described by this "master" B. H. Liddell Hart is deception. He separates and cites the distinction between using an indirect approach to achieving goals and more direct methods. Obviously, indirectness and deceit make "great bedfellows".

What is outstanding about this is that the great generals of military history figured out how to apply these very principles even using enormous bodies of men. The more deeply this is understood, the more one is able to discern the awesome counteractive results that satellites and satellite photography really do have to offer. Another fascinating observance in this book is the clarification of the difference between strategy and grand strategy; that is, different levels of order of strategic actions.

The limitations of historical generals and other lessons are also included.

By the end of the book, one has been introduced to the most important features of military strategy. This can be of great use not only for the warriors out there, but also for the civilian who simply wishes to understand the news or some of the behavior of the military and the politicians during times of war. This book, cited as a classic in its field, continues to offer readers a fantastic introductory overview of an often complex but at times quite simple subject: military strategy.

More summaries and resources for teaching or studying Strategy.