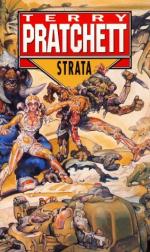 Terry Pratchett
This Study Guide consists of approximately 31 pages of chapter summaries, quotes, character analysis, themes, and more - everything you need to sharpen your knowledge of Strata.

This detailed literature summary also contains Topics for Discussion and a Free Quiz on Strata by Terry Pratchett.

Strata is a science fiction novel by writer Terry Pratchett. Strata is the story of Kin Arad, a woman who is thousands of years old and who works for the Company building planets with strata machines. The strata machines are creations of an advanced society who died out many generations ago but have been utilized by the Company in order to perpetuate the human race. Kin learns of a flat world discovered by a survivor of a mission years ago to send pilots flying into the outermost regions of space. None of these pilots were expected to survive, but this one apparently has and stumbled onto a world possibly fashioned by the creators of the strata machine. Strata follows Kin and two companions as she lands on and explores this strange, flat world. Strata is a science fiction novel that explores universal questions in a way that leaves the reader guessing to the very end.

Kin Arad has just completed building a new planet. Several irregularities have been discovered, and Kin is forced to discipline those responsible even though she can recall doing similar things in her own past. After this meeting, Kin is alone in her office when a strange man, Jago Jalo, suddenly appears. This man claims to have in his possession several artifacts from a flat world. Kin has lunch with this man and learns he is the survivor of the Terminus mission, a mission that sent three pilots into the furthest reaches of space without expecting them to return. This man has returned and claims he found a flat world created by the Great Spindle Kings, the same race of creatures who are credited with creating the strata machines that make it possible for Kin and the Company to make new planets.

Kin is curious enough to agree to wait for a message from this man to tell her how to find this flat world. When the message comes, Kin is surprised to find herself ordered to visit Kung, a strange planet that is perpetually under rain clouds. In the lounge above Kung while waiting for a shuttle to the surface, Kin meets Marco Farfarer, a Kung who was born and raised on Earth. At the same time, Kin is also given a raven in a cage that is meant for Jago Jalo. Kin and Marco go to the surface and make their way to a ship for which Jago arranged. On board the ship, Kin and Marco meet Silver, a Shand, who is also to join them on their mission to the flat planet. As the three companions get to know one another, Jago arrives and is attacked by the raven. Somehow the raven has managed to burn its way out of the cage. Jago has a heart attack and dies. The three companions move him into a medical tube for treatment when they return home.

Marco decides they should go on with the mission before anyone has a chance to voice their own opinion, so he pilots the ship into space. Kin and Silver argue, but there is nothing they can do. On the flight to the flat planet, Silver reads Kin's book about the Great Spindle Kings as Kin and Marco get to know one another and Silver. When they arrive at the flat planet, they move around it to see how it works, coming to the realization that it must take many machines to keep the planet working. When they go through a hole in the planet's atmosphere, they are hit by a ship attempting to sail over the waterfall at the edge of the planet. This collision causes a great amount of damage to the ship, leaving it unable to fly back home.

Marco puts the ship into autopilot and directs everyone to put on their space suits. Silver insists on taking the dumbwaiter with them in order to make herself food. If Silver does not eat a proper diet, she becomes insane with hunger. They fly down to the planet surface using propulsion belts on the space suits. Once there, they camp on a small island. The next morning, a ship comes toward them but is caught in the current of the waterfall. Kin saves them and the ship's captain agrees to take them to civilization. On the way, they are attacked by fire breathing dragons but manage to escape. Once among civilized people, they begin to learn about these people and discover a great number of similarities between their history and the history of the original Earth.

Silver, Marco, and Kin decide to use their suits to travel to the heart of the planet where they hope they will find the Builders. On the way, Kin is arrested by a group of religious people who believe her to be a water spirit. During her captivity, Kin meets a flying demon whom she later realizes is a robot who flies using a technology even the Company had trouble reproducing. Later, Kin and her companions meet a man with a flying carpet. This man takes them captive for crimes he believes Jago committed against him. Kin is able to use a flying statue and a magic sword to escape with her companions.

Finally Kin and her companions reach the hub of the flat planet. They are transported inside where Kin makes her way to the main control room. There are no longer any humans living inside the control rooms, but Kin learns the builders bring a single human there every few years to work as a Disc Master to help them run the planet. However, the planet has gotten so old that the builders now need help replacing the machinery. Kin agrees to build them a new planet if they will help her and her friends return to their home planet. They agree, and Kin and her companions fly away from the flat planet.

More summaries and resources for teaching or studying Strata.