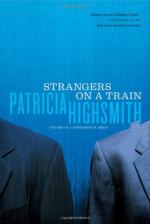 Strangers on a Train Summary & Study Guide includes comprehensive information and analysis to help you understand the book. This study guide contains the following sections:

This detailed literature summary also contains Topics for Discussion and a Free Quiz on Strangers on a Train by Patricia Highsmith.

The novel "Strangers on a Train" by Patricia Highsmith is as much mystery fiction as it is a psychological thriller. Guy Haines, a successful architect, is heading to his hometown in Texas from New York, where he hopes to finally settle an ongoing three-year divorce with his wife, Miriam. Miriam, who has cheated on Guy, is pregnant by another man, so Guy hopes she is finally serious about proceeding with the divorce. On the train ride to Texas, Guy meets Charles Bruno, scion of a wealthy Long Island family, who is on his way to vacation with his mother. Bruno immediately takes a liking to Guy and begins conversing with him. They talk about their lives. Bruno asks Guy if Guy has ever considered killing anyone and says that he would be happy to swap murders -Miriam for Bruno's hated father. Guy rejects Bruno's offers.

Bruno then takes things into his own hands by tracking down and murdering Miriam while Guy is in Mexico with his fiancee, Anne. Bruno then begins calling, writing, and visiting Guy, telling Guy that he is responsible for Guy's freedom and that Guy now owes him. After sending malicious letters to business associates and to Anne, Bruno finally convinces Guy to kill Bruno's father. An investigation ensues. Guy is plagued with nightmares and guilt and Bruno begins experiencing the same paranoid psychosis. Bruno's heavy drinking doesn't help, either. Things only get worse when Gerard, the detective in charge of the investigation, begins finding links between Bruno and Guy, from the train ride to phone calls and the murder of Miriam and Bruno's father within a few months. Guy, meanwhile, gets married and begins to have even more success with his architectural work.

During a sailing event, Bruno can't handle anything anymore, and commits suicide by drowning himself. This is too much for Guy, who decides to confess his crimes. He flies down to Texas to talk to Owen, Miriam's lover, to confess everything. Gerard follows Guy and overhears him. Guy then promptly turns himself over to Gerard.