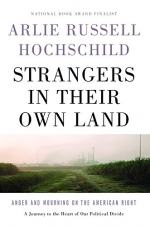 Strangers in Their Own Land: Anger and Mourning on the American Right Summary & Study Guide

Arlie Russell Hochschild
This Study Guide consists of approximately 42 pages of chapter summaries, quotes, character analysis, themes, and more - everything you need to sharpen your knowledge of Strangers in Their Own Land.

Strangers in Their Own Land: Anger and Mourning on the American Right Summary & Study Guide Description

Strangers in Their Own Land: Anger and Mourning on the American Right Summary & Study Guide includes comprehensive information and analysis to help you understand the book. This study guide contains the following sections:

This detailed literature summary also contains Topics for Discussion on Strangers in Their Own Land: Anger and Mourning on the American Right by Arlie Russell Hochschild.

The following version of this book was used to create this guide: Hochschild, Arlie Russell. Strangers in Their Own Land. The New Press, 2016.

There has been a growing divide, not only in American politics, but in American society is recent years. Conservative, rural citizens and their progressive, urban counterparts not only vote differently, but get their news from different sources, view the other side as the obstacle to their ideal society, and blame their counterparts for the ways in which America has gone wrong. In an attempt to bridge this divide one UC Berkeley professor spends years interviewing and interacting with conservative Louisianans, attempting to break down the “empathy walls” that have come between them. In the process, she will discover the secret to Donald Trump’s eventual electoral success: appealing to a group of who feel they have lost their America. This sentiment, she concludes, is not entirely conservative myth-making.

Focusing on the state of Louisiana, one of the country’s poorest and most environmentally besieged, she enters the homes of die-hard Republican and Tea Party loyalists, some of whom have been personally affected by the environmental mismanagement of the state’s energy industry. Also, while they remain committed to the ideals of self-reliance and community – not government – assistance, the author notes that Louisiana itself is a welfare recipient, having much of its state budget supplied by the federal government. This is not hypocrisy on their part, though; the author discovers that these people – generally individuals of great compassion, loyalty, and hospitality – have seen a considerable decline in their living standards in recent years while others have risen, and the state government has been utterly ineffective at preventing a decline in their environmental quality. In fact, in many cases, the state has enabled it.

This is not to say that her subjects convert the author to their point of view. Through additional research, she discovers that rural communities have been targeted by polluting industry for decades because of their “least-resistance” personality types and lack of a background in protests or activism. Furthermore, the narrative these men and women have been sold – that reduced regulations for energy companies will translate into more jobs and more investment in the state of Louisiana – is false. Big Energy’s contributions to Louisiana’s jobs and revenue have been continuously dropping, and the multinational firms harvesting its resources are headquartered elsewhere, meaning its revenues are largely spent out of state. Rather than picking up on this, conservatives in rural areas have been bombarded through conservative media with stories of illegal immigrants taking away their opportunities, and liberal elites glowering at them with contempt for their religious views.

Still, the author comes away from the story with respect for communal bonds between Louisianans, as well as their personal integrity and devotion to their beliefs. Despite this respect, however, she notes with concern the rise of Trump, a candidate almost perfectly designed to appeal to rural men and women’s sense of victimization. At his rallies Trump, through his projections of strength and identification with voters’ anger, promises to restore the opportunities they have lost. Even as he says he will rejuvenate the America they remember, he promises to expel unwelcome visitors such as undocumented immigrants the Muslims, and acts this out at rallies by evicting unwelcome protestors.

The author ends her book by encouraging gestures of understanding between progressives like her and the Louisianans who have welcomes her into their homes and told their stories. At the same time, she urges conservatives from the South and Midwest to get to know other liberals from the North and coasts, assuring them that they too, feel unsure of their place in America, having seen many of their treasured public institutions come under siege from private interests. Though they may have different political, social, and religious beliefs, the progressives and conservatives both know what it feels like to be a “stranger in their own land.”

More summaries and resources for teaching or studying Strangers in Their Own Land: Anger and Mourning on the American Right.

Strangers in Their Own Land: Anger and Mourning on the American Right from BookRags. (c)2022 BookRags, Inc. All rights reserved.