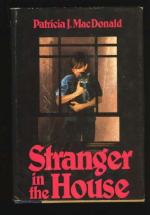 MacDonald, Patricia J.
This Study Guide consists of approximately 33 pages of chapter summaries, quotes, character analysis, themes, and more - everything you need to sharpen your knowledge of Stranger in the House.

Stranger in the House Summary & Study Guide includes comprehensive information and analysis to help you understand the book. This study guide contains the following sections:

This detailed literature summary also contains Quotes and a Free Quiz on Stranger in the House by MacDonald, Patricia J. .

The following version of this book was used to create this study guide: Lapena, Shari. A Stranger in the House. New York: Viking, 2017.

A Stranger in the House opens with Karen Krupp in a panic as she is driving away from an abandoned restaurant. She accidentally crashes into a telephone pole and suffers a concussion. Meanwhile, her husband Tom arrives home to see that she is missing. A police officer arrives at his home, informs him of the accident, and takes him to the hospital where Karen is being treated. Karen has suffered slight amnesia from the concussion. She cannot remember the events of the evening.

Police soon find a dead body in the abandoned restaurant from which Karen had driven away. Because Karen’s car accident was nearby and took place around the approximate time of death, Detective Rasbach—the assigned homicide detective—believes Karen to be connected to the murder. He goes to Tom and Karen’s house to question them. Karen tells Rasbach about her amnesia and denies any knowledge of the murder. Rasbach’s subsequent background check on Karen reveals that she may have previously lived under a different identity.

A flashback reveals that Karen used to live in Las Vegas under a different name. However, one day, she faked her death and assumed her new, forged identity. Karen partially recovers from her amnesia. She remembers receiving a phone call from a man who addressed her as Georgina. Afraid that this man would ruin her new life, she arranged to meet him at the abandoned restaurant. She brought a gun with her. She soon admits to Tom that her previous name is Georgina Traynor and that the murdered man was her husband Robert Traynor. She says she faked her death and ran away from him because he was abusive. She says that she brought a gun with her when she went to see him as a means of protection. She says that she does not think she would have been able to kill him.

Rasbach soon discovers the identity of the murdered man, and he also discovers Karen’s identity. Rasbach arrests Karen and takes her into custody. The Krupps’ next-door neighbor Brigid, who is secretly obsessed with Tom, plans on seducing Tom after Karen is arrested. Brigid goes to Tom and tells him that she followed Karen on the day of the murder. She threatens to testify against Karen unless Tom has sex with her, which he does. Brigid later plants the murder weapon—a gun that she took from the scene of the crime—in the Krupps’ garage. She tells the police that they should search the Krupps’ property for the murder weapon.

The police perform the search and find the gun, but this only serves to make Brigid a suspect, as the police know that the gun was not in Karen’s possession when she crashed her car. Karen then tells the police that her memory has returned and that she did not kill Robert. She says that Brigid must have killed Robert to frame her because Brigid is in love with Tom. The district attorney tells Rasbach to drop the case. Since Brigid and Karen can each claim the other as the real murderer, there is no way to convict either of them. Karen and Tom then resume their lives as normal. The end of the novel reveals that Karen did kill Robert and that Robert was not abusive. Karen had run from him after stealing $2 million from him. The novel also reveals that Brigid has become pregnant with Tom’s child.

More summaries and resources for teaching or studying Stranger in the House.

Stranger in the House from BookRags. (c)2022 BookRags, Inc. All rights reserved.