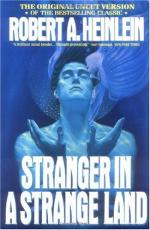 Jubal's house in Pennsylvania is a large mansion with a swimming pool and gardens. He keeps an open-house policy, as long as his guests are useful or interesting.

The government puts Michael into the Bethesda Medical Center where he is closely guarded. Ben Caxton attempts to free Michael and fails. Gillian Boardman succeeds.

Foster's church provides many of the things that humans need from religion and is a large structure with restricted zones.

Michael's church is a large structure with restricted zones, but moves away from an institutional quality to luxurious comfort.

The hotel in Florida, owned by Michael, is where he and his followers gather after the main church burns down. Michael's martyrdom happens at the hotel.

Mars, the fourth planet from the Sun, is where Michael grows up and learns his superhuman powers...