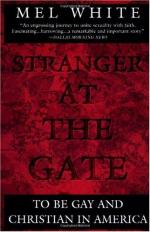 Stranger at the Gate: To Be Gay and Christian in America Topics for Discussion

Mel White
This Study Guide consists of approximately 28 pages of chapter summaries, quotes, character analysis, themes, and more - everything you need to sharpen your knowledge of Stranger at the Gate.

White claims that he does not blame his childhood community for their attitudes about homosexuality. Do you think he is right not to do so?

Discuss some of White's films. How were they connected to his internal spiritual struggles?

Why does White excuse himself for having homosexual affairs on his wife Lyla? Do you think he excuses himself? Do you think his rationalizations are justified?

Explain the sense of spiritual relief that White experienced when he was open about his homosexuality. How did White feel after engaging in homosexual sex acts with...

More summaries and resources for teaching or studying Stranger at the Gate: To Be Gay and Christian in America.

Stranger at the Gate: To Be Gay and Christian in America from BookRags. (c)2021 BookRags, Inc. All rights reserved.