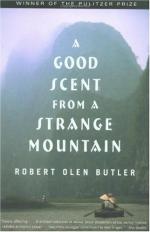 Robert Olen Butler
This Study Guide consists of approximately 44 pages of chapter summaries, quotes, character analysis, themes, and more - everything you need to sharpen your knowledge of A Good Scent from a Strange Mountain.

Tim O'Brien is another writer of Butler's generation who served in Vietnam. He has also written a collection of interconnected stories, The Things They Carried. These stories focus on a platoon of foot soldiers, recounting their experiences in Vietnam and afterwards.

The author of the screenplays for Apocalypse Now and Platoon, Michael Herr covered the Vietnam War for Esquire magazine. Many people consider his book Dispatches (1991) to be the best account of the Vietnam War.

Henry Roth's 1934 novel Call It Sleep tells of the experience of a young Jewish immigrant living in a ghetto in New York. After years of going unnoticed, critics and scholars rediscovered the book in the 1950s, and today it is viewed as a modern classic.

Le Ly Hayslip's When Heaven and Earth Changed Places (1993) details her experiences during the Vietnam War, describes her journey to...

More summaries and resources for teaching or studying A Good Scent from a Strange Mountain.

A Good Scent from a Strange Mountain from Gale. ©2005-2006 Thomson Gale, a part of the Thomson Corporation. All rights reserved.