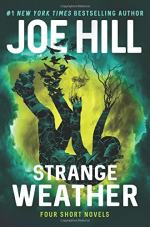 “The following version of this book was used to create this Study Guide: Martin, A.J. Strange Weather. HarperCollins, 2017. Print.”

Joe Hill's Strange Weather is a collection of four short novels published in 2017 by HarperCollins. The first title is "Snapshot," which was originally published as "Snaphsot, 1988" in 2016 in Cemetery Dance: The Magazine of Horror and Suspense. Snapshot tells the story of Michael Figlione, a 13-year-old boy tasked with taking care of his neighbor, Shelly Beukes. It is originally believed that Beukes suffers from dementia, but there is a man with a Polaroid camera. When he takes pictures, the victim forgets chunks of their lives. Michael is tasked with taking care of Shelly while her husband Larry deals with the fallout of fires set to his gym franchise. The night Michael takes care of Shelly, the antagonist named the Phonecian turns up and attempts to take more pictures of Shelly. Michael defeats him by taking a series of his pictures and then sends him away. Michael then holds on to the camera and leaves it in a closet in his house.

When his father dies, Michael returns to the family house and then finds the camera again. He drives over it with his car and finds out that the camera held an alien material inside of it which could influence the darkest part of the human mind and manifest its user's desires. The material then solidifies and freezes, and Michael repurposes it during his tech Ph.D. in material sciences in order to create unprecedented technology, which Hill attempts to say is responsible for the memory capacities of smartphones and other smart technology. Michael retired early as an adult because he used up all of the material, and he never found something similar to that alien material ever again.

The second story, "Loaded," tells the story of several perspectives of a shooting that occurred at a local mall. The story follows the history between the shooter, a young girl named Becki, and her employer, who is significantly older than her. The mall cop, a man named Randall Kellaway, commits further crime violence when he believes that a Muslim patron of the store is responsible for the terrorism. He shoots her baby strapped to her chest, thinking the baby was a bomb. To cover up his mistake, he kills the original shooter, Becki, and then kills the only witness.

The story then follows Aisha Laternglass, a reporter with the St. Possenti Digest, to try to uncover the mall shooting story. She does not trust Kellaway because of his history with hate crimes and his tendencies with guns. While he enjoys a brief period of time as a local hero, Kellaway is eventually found out as a killer and then proceeds to kill several more people in a murder spree, including Laternglass and her eight-year-old daughter as well as his own estranged family.

The third story, "Aloft," follows the survival of Aubrey Griffin, a young 24-year-old boy. He is incredibly anxious and insecure, and he has devoted a significant amount of his life fixated on the woman of his dreams, Harriet, who does not love him back. He is stuck on a cloud in the sky after a failed skydiving attempt, and he manages to survive on the cloud, where things appear to him which he desires. However, he cannot survive long because he has no food and has no warmth. Most of what the alien ship produces is an illusion.

The story is interspersed with flashbacks of Aubrey's college life, in which he meets his unrequited love, Harriet, and their mutual friend, June, who recently died of cancer. Aubrey and Harriet did get together at one point, but then she pulled away because she did not feel the same about him. Nursing the rejection and the hope that one day she would change her mind, Aubrey continued to love Harriet throughout most of the story until his eventual descent from the ship. While existing on the cloud, he found the center of the ship, a giant black pearl that contained a giant sleeping face. The reader never gets a resolution regarding what the face is or what it means, but Aubrey startles the ship and it deposits him back on land where he returns home shortly thereafter.

The fourth and final story, "Rain," tells the story of the sky raining chemically-made nails of crystal. The hard rain kills several thousand people, and it is then that they realize that the material was the result of chemical warfare. The story follows a young woman, Honeysuckle Speck, as she navigates the loss of her girlfriend and mother-in-law due to the chemical rain. Honeysuckle then proceeds to walk to Denver to find her father-in-law to tell him that his family has died. Along the way, she meets a man named Marc DeSpot, who becomes an unlikely comrade in arms. Honeysuckle also runs into conflict with an end of the world cult called the Finders, a prison chain gang and a runaway convict, and she ultimately discovers that the culprit behind the chemical warfare was her neighbor, Ursula Blake, who blames the government for her chemist husband's suicide. She finished his project and then poisoned the sky to rain needles. The story ends with Ursula dying to protect her son, and Honeysuckle and Marc living together in Honeysuckle's apartment as several international governments attempt to make the sky pure again.