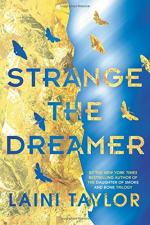 Importance: Laini Taylor repeats this quote describing the blue color of the godspawns’ skin several times throughout the novel. She first writes it in the prologue to describe the blue girl who falls from the sky. Taylor uses this depiction of the godspawns’ appearance to highlight the way these individuals stand out against the expected appearances of the rest of society. The fallen girl’s blue skin is an impactful representation to the people of Weep of the violent, traumatic past they experienced at the hands of the gods in the citadel. This exterior defining factor illustrates that it will be difficult for the people of Weep to forget the associations they have with gods of similar appearances and to forgive the godspawn for their parent’s past actions.