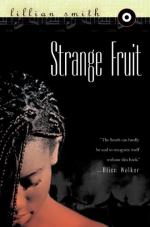 Lillian Smith
This Study Guide consists of approximately 59 pages of chapter summaries, quotes, character analysis, themes, and more - everything you need to sharpen your knowledge of Strange Fruit.

A tent revival serves as the backdrop for this novel of racial tension and transition in which a white man is shot, and an African American man hung and burned in retaliation. The novel focuses on the relationship between a black woman and a white man at a time during which that type of relationship was not accepted. As the white man seeks acceptance from his family he breaks off the relationship but his attempt to provide for the now-pregnant girl has unforeseen and terrible consequences.

The August heat paired with the cries for salvation from the tent revival set an emotionally charged stage for the story of hate, racial discrimination, and family turmoil. As the son of the town’s doctor, Tracy Deen is expected to make something of himself. Instead, he’s been ungrounded and has been secretly having an affair with an African American young woman, Nonnie Anderson. As the novel opens, Nonnie tells Tracy she’s pregnant. Tracy, who is torn between his love for Nonnie and his desire to please his family, decides to join the church and propose to Dorothy Pusey, a white girl he’s also been dating. In an attempt to take care of Nonnie and her baby, Tracy arranges for Henry McIntosh, a black man who has been a servant to his family, to marry Nonnie.

Trouble begins when Ed Anderson, Nonnie’s brother, overhears Henry bragging that Tracy has paid him to marry Nonnie and cover up the illegitimate pregnancy. In his anger Ed, who had come home only to try to convince his college-educated sister Nonnie to move north with him, shoots Tracy. Ed is whisked away to safety in the north but when Tracy’s body is found, all of the blacks know that someone will pay.

The novel is set in the Deep South during a time period of great transition following the Civil War. Blacks are being paid for their work but are still considered inferior to white people. Many have moved north hoping for better jobs and better treatment. The void leaves farmers without the free labor they’d once had for cotton harvest time. Blacks are now in competition with whites for jobs. Common laborers are angry they aren’t being paid more and can now be replaced by cheaper black laborers. This anger kindles the hate many whites hold for the blacks.

Bill Talley leads a mob against Henry, who found the body, even though many know Henry could not have been responsible for the murder. Despite attempts by his friends and family to hide him from the bloodthirsty mob, Henry is found and killed. Reactions from the community range from surprise that some of the same men who sought salvation at the revival altar were responsible for the cruel death of Henry to anger at the ignorance of the people in the south. The novel ends with a snapshot of Nonnie, her sister Bess and their friend Dessie preparing for and returning to their work as servants to the white people the day after Henry’s murder.

More summaries and resources for teaching or studying Strange Fruit.