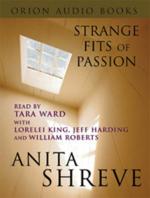 Anita Shreve
This Study Guide consists of approximately 40 pages of chapter summaries, quotes, character analysis, themes, and more - everything you need to sharpen your knowledge of Strange Fits of Passion.

This detailed literature summary also contains Topics for Discussion and a Free Quiz on Strange Fits of Passion by Anita Shreve.

Strange Fits of Passion is a novel by acclaimed author Anita Shreve. This novel is written as though the reader were sifting through the notes of a writer who authored a non-fiction article about a woman who killed her husband in an attempt to free herself to be with her new lover. This woman, writing to the author from prison where she awaits trial on murder, describes a relationship that was volatile and abusive. Unfortunately, the author interprets these claims as a thinly veiled attempt at sympathy and wrote an article that very likely influenced the judge to sentence the domestic violence survivor to life in prison. Strange Fits of Passion is a unique work of fiction that leaves the reader struggling to answer the question of what constitutes self defense.

Maureen English met Harrold English her first day on the job at a New York City magazine. Maureen falls under Harrold's spell and before she knows what has happened, she's practically living with him. When Harrold becomes violent, forcing Maureen to be intimate with him even though she does not want to, Maureen makes excuses, blaming herself for his actions. Later, when Harrold takes Maureen to meet his father and she finds him a cruel, angry man, she understands the temper that Harrold often shows. Maureen believes Harrold only needs to be loved, that she can help him change if only she can make him happy enough.

Maureen struggles with the escalating violence in her marriage, giving up her career and her social life in order to please Harrold. When the violence becomes too much, Maureen considers leaving. However, Maureen soon learns she is pregnant and believes that this child will help Harrold to stop his cruel behavior. Instead Harrold becomes more violent, more angry, as though he resents his inability to control what is happening to his wife's body and to their shared life. When the child is born, Harrold seems to become calmer for a short time. Harrold spends time with the baby, walking the floor with her at night, the picture of a good, caring father. Maureen begins to hope things will change.

When Harrold becomes violent again, Maureen believes not only is her life in danger, but the safety of her child is now in question. Maureen leaves Harrold, going to the safety of her mother's home. Maureen, an only child born to a single mother, is afraid of a future alone, but is determined to keep her child safe. However, Harrold finds her and tells her if she does not come home, he will kill her. Maureen returns to Harrold and finds him repentant, eager to make their marriage work. For a short time, Maureen believes Harrold has really changed this time. Maureen and the baby attend a party at the magazine with Harrold, appearing to everyone to be a happy family. Unfortunately, Harrold becomes convinced that Maureen is flirting with a rival writer and tells her to go home.

Harrold arrives home a short time after Maureen, drunk and angry. Harrold beats Maureen more severely than he ever has before. Maureen knows that Harrold will kill her the next time. Maureen packs a bag for herself and the baby, takes the money from Harrold's wallet, and runs away. Maureen buys a map of the east coast and picks a destination at random, a small dot that seems insignificant enough that a woman could disappear there.

Maureen arrives in St. Hilaire, Maine late in the evening and stops at the general store for a few necessity. The owner directs Maureen to the only hotel in town. It is here that Maureen ceases to exist and Mary Amesbury is born. Mary finds a cottage to rent the following day. As Mary settles in, she is befriended by both her new landlady and a local fisherman, Willis Beale. Willis makes it clear that he is interested in an affair, but Mary politely declines. The last thing on Mary's mind is an affair, until she meets Jack Strout. Jack is quiet, polite, unlike any man Mary has known before. Their few weeks together are the happiest Mary has ever known.

One morning, Mary wakes to find the baby burning with fever. When Jack comes, he takes them to the next town where there is a medical clinic. The doctor diagnosis an ear infection, but Mary cannot remember which type of antibiotic her baby is allergic to. Mary is forced to give the doctor the name and number of her pediatrician in New York even though she knows contacting him may alert her husband to her location. In fact, it does. The next morning, Harrold arrives, determined to take his family back to New York. When Mary refuses, Harrold attacks her with a fork and rapes her. Mary waits until Harrold passes out from the excess of alcohol he has drunk and then goes to Jack's boat where she knows there is a gun. Mary takes the gun back to the cottage and shoots Harrold out of fear of what he might do to her or the baby when he comes to.

After Mary's first trial ends in a mistrial, a reporter for the same magazine where she worked begins to research a story about the case. Mary sends the reporter letters in which she tells her story. From these letters and interviews she conducted with the people in St. Hilaire, the reporter writes an article suggesting Mary killed her husband in order to be free to be with Jack. Shortly after the article appears in the national media, Mary is sentenced to life in prison. Mary's sentence is commuted after twelve years. Many years later, the author sees that Mary has died and decides to give her notes to Mary's daughter, hoping she might find some answers within them. Unfortunately, it seems the story only creates more questions for the young woman who was only six months old when her mother killed her father.

More summaries and resources for teaching or studying Strange Fits of Passion.