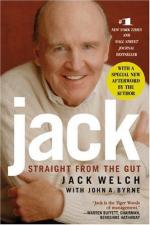 Jack Welch
This Study Guide consists of approximately 42 pages of chapter summaries, quotes, character analysis, themes, and more - everything you need to sharpen your knowledge of Jack.

Jack: Straight from the Gut Summary & Study Guide includes comprehensive information and analysis to help you understand the book. This study guide contains the following sections:

This detailed literature summary also contains Topics for Discussion and a Free Quiz on Jack: Straight from the Gut by Jack Welch.

Jack Welch narrates the story of his childhood, his college years and his career with GE from 1960 when he begins with them fresh out of college to 2001 when he retires as its Chairman. In five sections, Jack sets a backdrop and tells about his arrival, his management style and philosophy, his rise through the GE hierarchy and his avoidance of the company bureaucracy for as long as he could manage it. He relates his big wins, and big losses. He details the competitive process and his "dark-horse struggle" to make it into the chairman's seat, and the mistakes, successes, politics, and relationships along the way. He elaborates on his four company-evolving initiatives, his final year with GE, including his attempt to purchase Honeywell, sell-off of company sectors, and the complex procedure of finding his own successor.

From his mother, Jack learns leadership style and/or management, that there are no shortcuts, and that facts must always be faced. He becomes skilled at confidently taking risks. His mother also impresses upon him that to know how to win, one has to experience loss and recognize that even losing has its value. Jack's work ethic, motivation, and lust for current events and news originates with his father. He also learns from experience that mentors are necessary for success. As he moves up the corporate ladder, he leverages his entrepreneurial power, creatively solves problems, learns how to play the executive game, and finds himself in contention for the chairman's seat.

As chairman, Jack knows where he wants to take the company, and he creates turmoil, uncertainty, and confusion in the process. He implements his three-circles concept, sells off GE businesses, and imposes cutbacks and layoffs. At the same time, he spends millions building on his "soft values of excellence" concept.

A culture gap develops in the 1990s. GE does not become part of the developing digitized economy. Jack passes up numerous high-tech opportunities that can be good strategic fits. The diverse "ups," include the focus on GE Capital that combines manufacturing and financial ingenuity. It is significantly successful and easily expands globally, into European and Japanese markets. The RCA acquisition presents a challenge of keeping NBC strong and profitable. NBC technologically evolves by way of joint ventures with cable and with Microsoft (online news). Technology advancements and the talent aid NBC's success. Jack's basic focus on the people who make up an organization is critical. This contributes to GE industries' successes. People also contribute to the "downs," especially as they relate to government laws, regulations, false accusations, and indifference to integrity.

In the 1990s four primary initiatives are pursued: globalization, product services, Six Sigma (quality and excellence), and e-Business. Initiatives are seeds put into the operating system to grow. Globalization grows from Paolo Fresco's passion for it. Product services grow after a Crotonville class recommends to define the markets more broadly. GE finally initiates Six Sigma in 1995. It reduces costs and increases revenues and overall efficiency and quality, internally as well as for the customers. GE enters e-Business late, but the Internet increases exposure and supplier and customer bases. E-Business reinvents and transforms GE.

One of GE's most intensive and unsuccessful acquisition attempts is for Honeywell. Although both companies agree on a deal, which is similar to GE's RCA deal years earlier, the European Commission conducts an extensive antitrust review that is ultimately rejected. The companies make two more attempts but to no avail.

Jack contends that finding his own successor is the most difficult thing he has had to do. He alters the business-centric process as a result of 20 years of GE evolution. The final three candidates do not undermine each other at any time, making a team Jack is proud of. Their individual businesses operate as part of the review process and generate record margins, market shares, and exceptional employee morale. As a result, Jack's choice for his successor is one he can live with for a long time.

More summaries and resources for teaching or studying Jack: Straight from the Gut.

Jack: Straight from the Gut from BookRags. (c)2022 BookRags, Inc. All rights reserved.