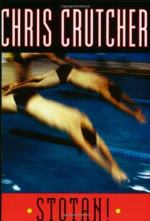 Chris Crutcher
This Study Guide consists of approximately 40 pages of chapter summaries, quotes, character analysis, themes, and more - everything you need to sharpen your knowledge of Stotan!.

Chapter 4 begins on November 23, the day after Thanksgiving. Walker explains that his parents took a trip to Seattle for the holiday but he stayed behind. After strategically mentioning he would be alone for Thanksgiving while at Elaine's house, he was invited to eat with her family. He is increasingly attracted to Elaine, but is in a difficult situtation because he is dating a girl named Devnee, who he feels he should break up with. Devnee is kind and very pretty, he explains, but lately his attraction to Elaine has made him think he ought to break up with her and pursue Elaine instead.

Dinner at Elaine's is entertaining. Her father is a packrat and the house is full of clutter and boxes of things he is saving. He is also fanatical about watching television and has two TVs on at all times.

More summaries and resources for teaching or studying Stotan!.

Stotan! from Gale. ©2005-2006 Thomson Gale, a part of the Thomson Corporation. All rights reserved.