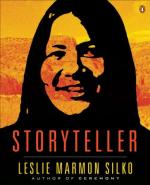 Leslie Marmon Silko
This Study Guide consists of approximately 59 pages of chapter summaries, quotes, character analysis, themes, and more - everything you need to sharpen your knowledge of Storyteller.

"Storyteller" was first published in the journal Puerto del Sol in 1975, and in 1981 it was collected in a mixed-genre book of the same name. "Storyteller" includes the following mix of genres: short story, poetry, and photography (and many of the poems seem more like stories than poems). The book was well-received, garnering special praise for its effect and statement as a whole. It is hailed as an important literary statement in the way that the mixing and inter-mixing of genres point to artistic practices beyond mainstream ones.

"Storyteller" depicts a clash of cultures in Bethel, Alaska, as well as the coming of age of a new storyteller in the local Eskimo community. The indigenous Eskimo community must contend with the "Gussucks" who, from the point of view of the main character, come not to live but to exploit the territory and its peoples. (The Yupik word "Gussuck" refers to any non-indigenous person; it is a derivation of the word "cossack," and thus can be dated to early Russian colonization of the area.) The main character's resistance to U.S. culture is evident from the description of her experiences at school, to which she goes for a brief time. She refuses to speak English and is whipped for her rebellion.

The young woman's identity as a storyteller is inseparable from this context of culture clash and resistance. Her story, when she begins to tell stories, appears to be of a personal nature (telling of a personal revenge). This story, however, is symbolic of the larger concerns of her community. This story about her parents' cruel death at the hands of a "Gussuck" storekeeper symbolizes her community's struggle against disdainful cultural interlopers in general. In Silko's story, the community storyteller witnesses, records and relates those events and circumstances of the most pressing communal significance or import.

More summaries and resources for teaching or studying Storyteller.

Storyteller from Gale. ©2005-2006 Thomson Gale, a part of the Thomson Corporation. All rights reserved.