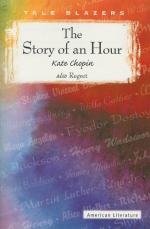 The Story of an Hour Characters

Josephine is Mrs. Mallard's sister. It is Josephine who tells Mrs. Mallard of her husband's death and who implores Louise to let her into the room after she has shut herself inside. Josephine, a woman who embodies the feminine ideal, assumes that Louise is suffering terribly from the news, not knowing her sister is actually overjoyed with the prospect of being a widow.

Brently Mallard, Mrs. Mallard's husband, is assumed dead after a railroad disaster. When he reappears at the front door, the shock causes Mrs. Mallard's death.

In the beginning of the story Mrs, Mallard is known simply by her married name. A wife who suffers from "heart trouble," she is described as "young, with a fair, calm face, whose lines bespoke repression and even a certain strength." When Mrs. Mallard learns of her husband's death, she becomes "Louise...