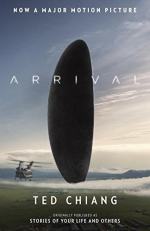 Ted Chiang
This Study Guide consists of approximately 43 pages of chapter summaries, quotes, character analysis, themes, and more - everything you need to sharpen your knowledge of Story of Your Life.

Story of Your Life Summary & Study Guide includes comprehensive information and analysis to help you understand the book. This study guide contains the following sections:

This detailed literature summary also contains Quotes and a Free Quiz on Story of Your Life by Ted Chiang.

The following version of this book was used to create this study guide: Chaing, Ted. The Story of Your Life, from “Stories of Your Life and Others." Vintage Books Edition, June 2016.

The story is told in first person narrative, and shifts between a pair of perspectives and intentions – a straightforward recounting of past events, and an exploration of events that simultaneously layers past, present, and future. This convention of stylistic framing is referred to throughout this analysis as the “narrative present.”

The story begins with the narrator (Dr. Sarah Banks, a linguist) addressing her unnamed daughter as Dr. Banks - from a perspective in the narrative present - describes a key point in her life: the moment of decision that led to her daughter’s conception.

The story then shifts into the past, as Dr. Banks narrates the events that mark the beginning of the story’s principle plot: her being invited to join a scientific team investigating the arrival of aliens on Earth. The aliens are referred to by the humans as “heptapods,” while Dr. Banks is joined, on her team, by physicist Gary Donnelly and military officer Colonel Weber. The team’s mission is to establish communication with the aliens through what is referred to as a “looking glass,” one of several similar communication devices sent by the heptapods to different locations on Earth. Dr. Banks and her colleagues make up one of several similar teams around the planet, each tasked with the same ultimate goals: to find out why the heptapods came to earth, and to keep them from learning about too much of earth’s technology.

Episodic descriptions of the investigations undertaken by Dr. Banks and her team are interspersed with descriptions (written from the perspective of the seemingly time-fluid narrative present) of Dr. Banks’ memories of her daughter. These memories include references to her teenage years, her childhood, and her young adulthood, including her death in a mountain climbing accident. These memories are not experienced in chronological order, but the narratives of the experiments in communication with the heptapods are. These experiments involve Dr. Banks and her team (primarily Gary) developing both understanding of, and skills in, the oral and written forms of communication used by the heptapods, referred to respectively as Heptapod A and Heptapod B. Dr. Banks finds herself being increasingly drawn to Heptapod B, which she discovers is a language that considers and refers to past, present, and future simultaneously. Meanwhile, she finds herself both thinking and experiencing memories in the same multi-leveled way. It eventually becomes clear that this unique experience of time is the reason why Dr. Banks’ construction of the narrative present is written and textured in the way it is: she is experiencing her past as though it is both her present and her future.

Eventually, as Dr. Banks begins a sexual and emotional affair with Gary Donnelly, there is one last communication with the heptapods, and then they disappear, leaving the looking glasses behind. Dr. Banks’ narration then returns to the image of the story’s beginning: the moments before her daughter’s conception. Narration now reveals that Gary is the father of her daughter, and that she (Dr. Banks) continues to be able to experience time and memory, past / present / future, all in the same moment, as she learned to do while conversing with the heptapods.

More summaries and resources for teaching or studying Story of Your Life.

Story of Your Life from BookRags. (c)2022 BookRags, Inc. All rights reserved.