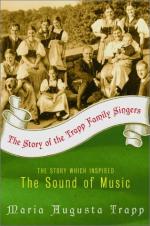 The Story of the Trapp Family Singers Summary & Study Guide

Maria von Trapp
This Study Guide consists of approximately 51 pages of chapter summaries, quotes, character analysis, themes, and more - everything you need to sharpen your knowledge of The Story of the Trapp Family Singers.

The Story of the Trapp Family Singers Summary & Study Guide includes comprehensive information and analysis to help you understand the book. This study guide contains the following sections:

This detailed literature summary also contains Topics for Discussion and a Free Quiz on The Story of the Trapp Family Singers by Maria von Trapp.

The Story of the Trapp Family Singers, by Maria Augusta Trapp, inspires stage and screen adaptations known to theatergoers as The Sound of Music. In her memoir, Maria is a recent graduate from Teacher's College. She is reviewing fifth grade workbooks when Reverend Mother Abess summons her. Novitiate candidates only see the Reverend Mother from afar. Worried over being in trouble over her tomboy antics, Maria takes a longer route to examine her conscience on her way to her superior's quarters.

Reverend Mother eases Maria's conscience, but informs her it is God's Will that she leave the abbey for a year to teach an ailing child of a former sea captain. Maria falls in love not only with her pupil, but with the girl's six other siblings. The "Hausdame", Baroness Matilda, who supervises the servants, divulges the Captain's troubled life to Maria. Maria sympathetically prays for the Captain, but notes how rigid the children's lives are. One rainy day, the children become interested in her guitar. She starts teaching them folk songs, and singing becomes a favorite family pastime. Maria's manner affects everyone, including the Captain, who proves not so tyrannical as the Baroness describes.

Word is, the Captain plans to marry Princess Yvonne, who arrives to visit. The Princess tells Maria that the Captain is in love with her, but he can only be in love with what she does for the children. The Princess also lets slip her plan to send the children to separate boarding schools. The disclosures unsettle Maria, who decides to return to the convent at once. Fearing she will go, Princess Yvonne brings a priest to convince Maria that it is the Will of God that she stay until the wedding.

Maria stays but is now uncomfortable around the Captain. Baroness Matilda breaks her leg, and the Captain asks Maria to take over house management until he finds a replacement. Maria explains she has no housekeeping experience, but the Captain persuades her. Maria's new duties include writing the Captain a letter detailing daily events. Her return to the convent is imminent. She has not heard from the Captain and dares ask in one of her letters when he will get engaged. The Baron's mock response prompts Maria to send an angry response. The Captain interrupts his proposal to read her registered letter. He returns home unengaged. Teasing, he proposes to Maria, whose confusion leads her to the abbey to consult the nuns. Mother Abess deems it is the Will of God is that Maria marry the Captain.

Maria and Georg settle into married life. Adherence to their Catholic faith dominates all aspect of family life. The couple have their first child. Hard times set in when their bank goes bankrupt. Needed income results in their renting out several rooms and converting one room into a chapel. This leads to meeting Father Wasner, a musician, and who is impressed by the family's vocals. Under his tutelage, the Trapps learn complex classical pieces. They begin public performance, and ultimately tour Europe.

In March 1938, Hitler invades Austria. Hans, the Trapp's butler, is a Nazi sympathizer and they learn to watch what is said. The Trapp Choir is asked to perform at Hitler's birthday. The opportunity to make a fortune is at hand, but they cannot follow through. Saying no to the Nazis is dangerous. The family flees Austria with Father Wasner, who is granted permission to go with them by the Archbishops.

In September 1938, the Trapps embark for America and Maria is again pregnant. Their introduction to America begins at New York City, where cultural shock and language barrier results in comedic misunderstandings and adventures. Mr. Wagner, their manager, is unaware of Maria's pregnancy as they start their first tour. Upon realizing her condition several months later, Wagner cancels the rest of the tour when they need money most. They meet an Austrian acquaintance, who introduces them to a publicity agent, who books them for a Town Hall performance. The concert results in their meeting a Professor Albrecht, who introduces them to other music aficionados, who find the Trapp's a house to rent in Pennsylvania.

After Maria gives birth, Wagner plans a new tour. However, Immigration denies an extension on their visitor's visa. They must leave by March 4th, with nowhere to go. Georg cables an impresario who once proposed a tour in Copenhagen. The next months are uncertain. The Trapps survive on what Maria attributes to God's Will. Concert tours in Scandinavia crop up in time to carry them until May. In September, concerts in Sweden get cancelled, and all foreigners deported because the war breaks out. Intense prayer is answered in the form of Wagner sending the family tickets back to America for a second tour.

To recoup his investment on their boat tickets, Wagner books large venues. There are too many empty seats for lack of publicity. After twenty-four concerts, Wagner drops the Trapps because he has lost money. They audition for new management. Mr. Schang tells them their material is too long and too serious. He will give them a year's try if they come up with $5,000 for publicity and wear a little makeup on stage.

The family has no real home and little in the bank, but friends lend them the publicity money. On the road, life is rough due to the constant bus rides and cheap motels. An opportunity arises, and they purchase two cars. One summer, they vacation in Stowe, Vermont where the views remind them of Austria. A friend suggests they buy a farm there, and after almost giving up, a farmhouse on seven hundred acres presents itself.

They now own their own place. On the road, while making plans for the farm, Rupert and Werner are drafted. The family owes the biggest debt of their life, and Father Wasner must now rearrange all music to accommodate an all-female choir. There is uncertainty as to how the public will receive the new format; however, doubt is cast aside after triumphant reviews of their all-female debut.

The family moves into the farm, and a worker announces "sugaring season". They never heard of maple syrup, but soon learn everything about maple syrup and needed income results. Georg has misgivings regarding the deteriorated condition of the cabin. There are six months to go before they earn money performing. An architect and carpenter are consulted, but a blizzard knocks down the roof they have just begun to raise. From then on, construction is constant. Georg and all the girls are hammering. Trucks come and go. Friends come and help. Most men are at war. The Trapps overcome war restrictions on building materials. Money, as always, is scarce. Weekly, God comes through and they meet the payroll for the workers they hire. A teacher drops by with a truck full of schoolboys to help the Trapps build after the family gives a benefit concert to repair the school's leaky roof.

On a sixth concert tour, gasoline is rationed because of the war. They travel by rail and spend hours waiting on freezing platforms. Home again for a break from concerting, they pick up hammers and continue building. Someone informs Maria that an old CCC camp, where the family first performed in Vermont, will be torn down. The thought nags at Maria. She receives government permission to start a music camp. Pamphlets are printed to announce the camp. On the road, Maria reconsiders. Their house is not yet finished, and now another big project is planned. There is no backing out.

The tour is long and time to prepare for the Trapp Family Music Camp is short. They return from tour on May 24th. Campers are set to arrive on July 12. In this period, they must convert the army camp into a music camp. Carpenters, painters, and plumbers work around the clock. Beds, benches, toilets, and wash bowls are needed during a time when everything is rationed. The War Production Board is suspicious of so many permit requests. A hearing orders a year in jail for Maria on top of a $10,000 fine. Her tearful plea softens Board members into revising the campsite. Obstacles occur until the last minute, but their first music camp opens on time and proves successful.

Soon the family receives a letter describing the post war suffering of the Austrian people. The family forms the Trapp Family Austrian Relief Inc. This allows them to collect money, clothes, and non-perishables from coast to coast while on tour.

During a tour in 1947, the Captain becomes ill. He consults a doctor in New York. At first, Maria is told it is pneumonia. She cannot communicate with Georg, because of a telephone strike. When they speak, he tells her he is better but to please come. She arrives and his cheeks have hallowed. The doctor tells Maria that a cancerous tumor is inoperable. She faces her husband at the hospital without telling him the doctor gives him three months to live.

At home in Stowe, Vermont, a second doctor concludes that pneumonia is the culprit and does not agree with the cancer diagnosis. Georg will recover, he assures. In spite of the second doctor's words, Maria can't forget the first prognosis. Georg begins to ask for the children who are touring. When they arrive, they shocked at the sight of their father. Maria finds it more difficult to hide sorrow. She watches Georg struggle for breath. No medicine relieves him. She knows his time is near. A new doctor confirms that the end is at hand. The family is at his bedside when he passes. He is laid to rest on their land, to satisfy a request he once jestingly made of Maria.

Maria herself becomes deathly ill and receives last rites. Another tragedy befalls the family in the form of a mental illness for one daughter. Two others fall seriously ill and another has an accident. However, all recover. Maria becomes a US citizen. The family decides to name their home "Cor Unum", or "one heart", symbolizing their united heart.

More summaries and resources for teaching or studying The Story of the Trapp Family Singers.

The Story of the Trapp Family Singers from BookRags. (c)2022 BookRags, Inc. All rights reserved.