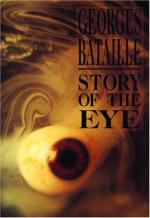 Georges Bataille
This Study Guide consists of approximately 22 pages of chapter summaries, quotes, character analysis, themes, and more - everything you need to sharpen your knowledge of Story of the Eye.

Story of the Eye Summary & Study Guide includes comprehensive information and analysis to help you understand the book. This study guide contains the following sections:

This detailed literature summary also contains Topics for Discussion and a Free Quiz on Story of the Eye by Georges Bataille.

The narrator falls in love with a young girl he meets at the beach. When he learns that this girl is a distant relative, the narrator finds himself drawn to her side as often as possible. The girl, Simone, sees the narrator's interest and begins to share it. The two begin a love affair that begins as innocent exploration. Soon, however, the couple begins to explore other avenues of sexual pleasure. When the couple is caught in the garden in the throes of passion, they grab the spy and force her to participate as well.

After experiencing this encounter with their young friend, the couple decides they would like to experience this sort of excitement with other friends. The couple throws a party and invites all their friends. At the party, the couple gets everyone drunk in order to lower their objections to their planned sexual overtures. Marcelle, their friend from the garden, objects and begs to leave. The narrator refuses to allow her, so she locks herself in the wardrobe. Soon Simone begins to seduce the young men in the room and the narrator turns his attention to the young ladies. When it is over, the narrator allows Marcelle out of the wardrobe. Marcelle is so upset by what she sees she begins to scream, causing the parents to rush to the room. Things go out of control and soon the police are called.

The narrator runs away from home out of fear of being arrested. Simone takes him into her bedroom and hides him there. Simone has become obsessed with Marcelle and tells the narrator she will not have intercourse with him unless Marcelle is present. They find out where Marcelle has been sent and visit there to see if they can rescue her. On the first visit, they find no way of getting Marcelle out. Simone falls ill during the ride home and the narrator spends several pleasant weeks taking care of her. When she heals, they again go to the sanitarium where Marcelle is being helped and steal her away.

At first Marcelle is confused by this situation. However, when they arrive at Simone's she remembers the day of the party and becomes agitated. Marcelle locks herself in the wardrobe once again. This time Marcelle takes her own life. Simone is upset by this because she had wanted to have Marcelle watch as the narrator took her virginity. Instead, Simone has the narrator lay Marcelle's body out on the floor and then has him perform intercourse on her beside the body. Simone then desecrates the body before she and the narrator run away.

Simone and the narrator go to Spain where Simone has a rich friend who will take care of them. The couple continues to explore their sexual obsessions with the help of this man. First they attend bull fights where Simone finds the violence exciting. Then the couple and their companion go to Seville where they come upon the church of Don Juan. Here Simone becomes fascinated by the local priest. Simone seduces the priest, kills him, and then runs once again with her two male companions.

More summaries and resources for teaching or studying Story of the Eye.

Story of the Eye from BookRags. (c)2022 BookRags, Inc. All rights reserved.