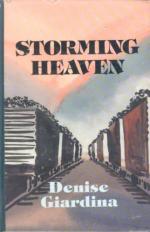 This detailed literature summary also contains Topics for Discussion and a Free Quiz on Storming Heaven: A Novel by Denise Giardina.

The novel Storming Heaven tells four different narrators' perceptions of events surrounding life in the coal camps of West Virginia in the first two decades of the twentieth century. The novel begins as coal companies move into the region and culminates in the story of a real-life deadly battle between mineworkers and mine owners backed by government. It is a story rarely covered in history books.

The novel begins before the arrival of the coal companies. Life in rural southwestern West Virginia is much like it has been for generations. The agrarian society farms the land and lives season to season. Rumors circulate that the railroad companies want the mineral rights to the land, and then agents of the railroad appear and begin asking for signatures on documents giving away mineral rights. Some landowners, like C.J. Marcum's grandfather, are adamantly opposed to giving away any portion of their land. When diplomacy fails, C.J.'s grandfather is murdered. Later the sheriff claims that C. J.'s grandfather made his mark on a document signing over the land, but C.J. knows that is not true because his grandfather was literate and could sign his name. Nevertheless, like countless other families, C.J.'s family is forced off their land.

Across the border in eastern Kentucky, the Bishop family resides on their farm they call the Homeplace. Coal companies are not yet attempting to gain control of that land, and the Homeplace continues on as it has.

After the arrival of the coal companies, camps are built near the mines to house the workers. Rondal Lloyd grows up in such a camp, and he describes the poverty and squalor in a place constantly covered by black dust. Though they work hard, miners are never able to save any money or even cover their expenses. They sink ever deeper into debt because of requirements that they must conduct all business with the mining company, including shopping at the company store, a place with inflated prices.

The Homeplace in Kentucky continues to present a sharp contrast to the conditions in the mining camps, as does the town of Annadel. For most of the novel the town of Annadel is outside the control of the mining interests, and it develops a culture unique in the southern United States. At a time of Jim Crow laws and racial discrimination, the residents of Annadel live in racial harmony.

After years of enduring the inhuman conditions of the coal camps and dangerous conditions in the mines, the workers begin attempting to organize a labor union. These efforts are met with severe oppression primarily at the hands of enforcers employed by the coal companies. The oppressive tactics, including forced evictions, assault, and even murder harden the miners resolve to change conditions. Eventually this leads to an armed confrontation between miners and the coal companies backed by hired thugs, corrupt law enforcement, and even the United States Army.

Although the story of the conditions in the West Virginia coal camps that led to the Battle of Blair Mountain rarely appear in history books, they are brought to life in this powerful piece of historical fiction.