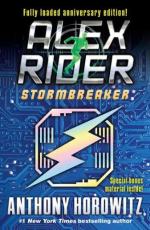 Anthony Horowitz
This Study Guide consists of approximately 24 pages of chapter summaries, quotes, character analysis, themes, and more - everything you need to sharpen your knowledge of Stormbreaker.

This detailed literature summary also contains Topics for Discussion and a Free Quiz on Stormbreaker by Anthony Horowitz.

Stormbreaker by Anthony Horowitz is the first novel to feature teenage spy, Alex Rider. In this novel, Alex's uncle dies in what he is told is a car accident. However, after doing some investigating on his own, Alex discovers his uncle was actually murdered. Convinced he never really knew his uncle, Alex continues to try to find out why someone would kill him. This leads to a meeting with Uncle Ian's employers who tell Alex his uncle was a spy for a special division of the MI6. Alex is blackmailed into finishing his uncle's case, a case that could lead to Alex's own murder. Stormbreaker is an exciting, suspenseful novel that jumpstarts the career of a highly unusual spy.

Alex Rider wakes in the middle of the night to hear the police knocking on the door. The housekeeper, Alex's good friend Jack Starbright, opens the door to learn that Alex's uncle, Ian Rider, has been killed in a car accident. Ian has been Alex's guardian since the death of his parents when he was an infant; therefore, his death leaves Alex without a relative to care for him.

The funeral is planned and executed by a man from the bank where Ian was an executive. At the funeral, Alex sees the head of the bank, a cold man called Blunt. When Alex and Jack return home from the funeral, they find that the office Ian always kept locked is now open and completely empty. This leads Alex to wonder if his uncle was really just a bank official.

Alex begins looking into his uncle's death, beginning with the accident itself. Alex goes to the salvage yard where he believes his uncle's car was taken. The car is there, but it was not damaged in a car wreck. However, there are bullet holes all along the driver's side door. Alex is about to leave when he hears people coming, so he jumps into the car. A moment later the car is lifted and put into a crusher. Alex just barely escapes death.

A few days later, Alex is called to the bank to talk about his uncle's will. While waiting for the executive scheduled to speak to him, Alex sneaks into his uncle's office. Alex is caught and knocked unconscious with a dart. When Alex wakes, he finds himself inside a house at a training facility. Blunt is there with a woman called Mrs. Jones. They tell Alex that his uncle worked for a special division of MI6. Ian was working on a case involving a business tycoon who recently announced the donation of thousands of computers to English school children. Blunt then tells Alex that they would like him to finish what Ian started by going into the company pretending to be a young man who won a contest to try out the computers. Alex refuses.

Blunt tells Alex that the bank controls his inheritance. If Alex refuses to help, they will sell his house, send Jack back to America, and place Alex in an orphanage. For this reason, Alex agrees. For the following few weeks, Alex is put through training with other men who are joining MI6 or the Special Air Service. These men resent having a child there and treat Alex poorly, but he proves himself by keeping up with them. After two weeks, Alex is sent to Sayle Enterprises to begin his assignment. Almost immediately Alex finds evidence his uncle left behind.

Alex quickly begins following the clues his uncle left behind and comes to realize that Herod Sayle has implanted a modified smallpox virus into each computer with the intention of having the Prime Minister kill all of England's school children with the push of one button. Alex is caught spying, but he escapes the many attempts on his life to reach the Prime Minister moments before disaster can strike.

More summaries and resources for teaching or studying Stormbreaker.