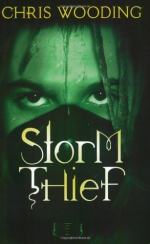 Chris Wooding
This Study Guide consists of approximately 45 pages of chapter summaries, quotes, character analysis, themes, and more - everything you need to sharpen your knowledge of Storm Thief.

The Storm Thief, by Chris Wooding is a dystopian novel about a trio of characters caught up in an a perilous adventure that shakes their isolated world to its very core. During the events of this story, the main protagonists are faced with overcoming their mistrust and loneliness, and have to try to find themselves a future in an uncertain world.

The story is set in the island-city of Orokos, a far-future scenario where people live in high walled districts, managed by a totalitarian regime called The Protectorate. This regime seeks to 'protect' its people from the effects of the probability storms (or the fluxes of energy that can rearrange buildings, people, create new objects or turn a person into a sugar cube) that radiate from the mysterious central tower of Orokos, The Fulcrum. Adding to this mess is the arrival of the Revenants, or energy ghosts which can kill with a touch, and can possess the bodies of the dead to continue their gruesome work. Through the course of the novel it is discovered that the Revenants and the probability storms were created many centuries ago by the founders of Orokos, the people known as the Faded, in an attempt to control their reality itself. Now the Faded have been destroyed, but living in their ruined citadel island is the Protectorate.

Rail and Moa are two youths from the ghettoes, who live by stealing for their employer the monstrous Anya-Jacuna, until Rail finds a Faded-era artefact with the ability to open any door. The two escape, seeking to change their fortunes in this chaotic city, and travel to the secret colony of Kilitas, who are staging a mass break-out into the oceans of Orokos, believing there to be land on the other side of the seas.

During their adventure, the two ghetto young men encounter Vago, the golem, a mechanical and flesh construction created by the Protectorate as the perfect weapon against the Revenants. However, Vago has escaped due to a particularly bad Probability Storm had taken him from his captivity, and he had been enslaved by a cruel toymaker in the wealthiest part of the city. Exploding into violence the golem leaves suddenly one day to fall in with Rail and Moa, and there begins a bizarre trust-triangle as Vago seeks friendship with Moa, but Rail and the golem detest each other.

As the chief of the Secret Police, Lysander Bane and the thief-assassin Finch (sent by Anya-Jacuna) close in on the trio, each attempting either to recapture the golem or the artefact, events spiral out of their control and the trio find themselves being taken to the Fulcrum, the source of the probability storms and the Chaos Engine at its heart. Here Rail has to learn to trust Moa and sacrifice his own stubborn ways, whilst Moa has to learn how to stand up for herself and the golem must decide which side he is really on: the Protectorate's or the ghetto folks.

More summaries and resources for teaching or studying Storm Thief.